Moving house has been a mixed event – the dismay at just how many boxes were required for the accumulation of our stuff, the amount of sugar soap we have gone through to clean houses old and new and the delight in unpacking boxes and setting up our new house (well, the banks house but our names are on the papers!).

The first weekend was the actual moving part – cleaning of the old house, hiring removalists and multiple moments of thinking “where the hell did I pack (x) thing that’s quite important”.

Last weekend was about unpacking/finding spots for things/spending too much money at Bunnings so we decided Friday night would be a night off to check out the local pub.

Now that we are living in the east, Midland is our new stomping ground so we headed to The Principal Bar & Restaurant.

The Principal – 23 Cale Street, Midland – open 10am every day

First of all, it is a good looking pub. Second, the food servings are huge. We noted the latter whilst we watched big dish after huge dish go out from the kitchen, their waitresses much have forearms of steel! We thought we were being sensible when we decided to get a few of the small dishes to share but we ended up with this … 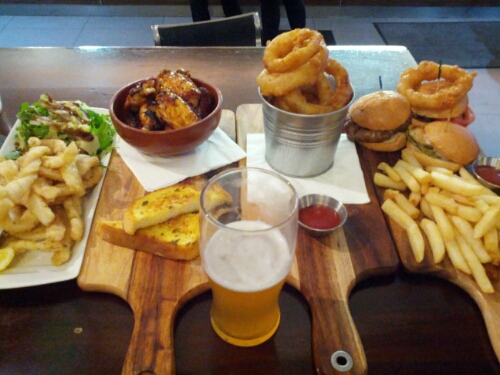 You are looking at, from left to right, is squid, Spanish marinated chicken wings, beer battered onion rings and three sliders. This is otherwise known as ‘way too much food for two people’, I would have also accepted ‘food that needs beer’, mostly just because there is an awful lot of oil and yum for the beer to play merrily with.

The chicken wings were my favourite, messy to eat and full flavoured with the magic addition of paprika. The sliders were a nice variety of chicken and avocado, BLT and good old fashioned beef. But again, seriously, way too much for two people.

We had The Principal’s beers on tap, their pilsner and wheat beer which the staff thought might have been brewed at Last Drop Brewing. I’m not sure but regardless of their origins the beers are pretty tasty. The pilsner was fruitier than I had expected but with a nice hint of spice and a clean, lightly bitter taste. The wheat was very sessionable, not too much banana and not overloaded with spice. My beer world gets caught up in beers that have words like “imperial”, “smoked” or “aged” or some sort of combination of all three so it is nice to have a pint of something clean and refreshing that I don’t have to think too much about.

All in all, not too shabby for a lazy Friday night close to home.