Here’s my calendar for the “week” and I cannot wait to drink beer, over indulge in meat and cheese, soak up as much beery knowledge as I can and, most of all, hang out with some really great people!

It’ just over a week until Good Beer Week kicks off for 2014 and to say I’m excited is a small understatement. It’s like saying that having a TARDIS would be a really nifty way of travelling. No it wouldn’t, it would be freakin’ amazing, just like Good Beer Week is going to be!

Planning for this began last year. I work for a big company so they ask you to submit your requests for annual leave for the year towards the end of the previous year. This meant I booked off my holiday for Good Beer Week many months in advance. Did I know for sure I was going? No. Did I book the time off work just in case? Hell yes.

Months went by, 2014 arrived and before you knew it the Good Beer Week program was coming up! I needed to get my act together if I was going, I needed flights and a bed to crawl into.

Hello Jetstar sale! Love cheap flights, I snapped up those bad boys quick smart. I rang the hotel I stayed in last year. Got an available room? Great weekly rate that didn’t cost the earth? Yup! Done! I was just short of a packed bag and it was only March.

Then the Good Beer Week program was released … Mother. Of. God. This thing is EPIC! The program is one great event after another; my copy will be dog eared before I’ve even checked my bags.

Here’s my calendar for the “week” and I cannot wait to drink beer, over indulge in meat and cheese, soak up as much beery knowledge as I can and, most of all, hang out with some really great people!

A free day, I haven’t bought any tickets for events at all. Perhaps a good chance to check out Pint of Origin venues, tap takeovers in selected Melbourne bars based on geography – all corners of Australia are represented along with New Zealand, Europe, USA and The Rest of the World.

There are also a tonne of free entry, week long events I’d like to check out, including Cookie’s Daily Food and Beer Matching, Rogue Beer and Burger at Beer DeLuxe and Mystery Cellar Dwellers at The Local Taphouse. 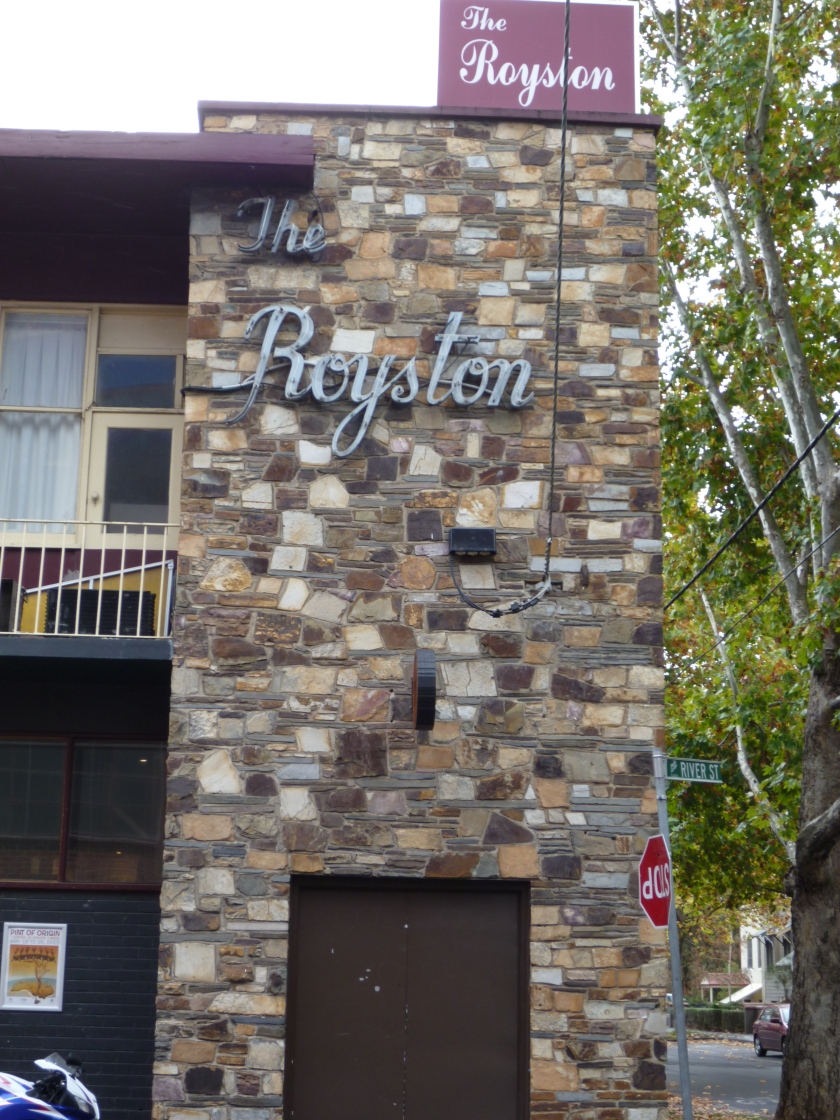 Sunday 18 May
The Event: Brew vs Cru featuring Garrett Oliver [sold out]

Why I’m going: Because I’d kick myself, punch myself, slap myself, if I did not go to this event. First, its Garrett Oliver – brewmaster at Brooklyn Brewery and beer author, I need to hear what this man has to say! Second, it is being held at Vue de Monde Rialto – a restaurant I have heard outstanding comments about. Third, not that I really need one, is the five courses of food, beer and wine pairing.

Excitement Level: Kid who has skulled red cordial and has a free pass to Disneyland.

Sophie’s Choice: If I wasn’t going to Brew vs Cru I’d be at Barrel and Beast at The Local Taphouse, barrel aged beers matched to slow cooked meats from the Taphouse’s American smoker.

Why I’m going: I love Russian Imperial Stouts, they’re like a loving embrace – lingering, comfortable and they always leave you wanting more. How I’ll be after an entire night of them is anyone’s guess but I’ll be sure to keep you updated. I’m also fortunate enough to be representing Crafty Pint at this event, hopefully I’ll be capable of writing something coherent and mildly entertaining the following morning.

Excitement Level: When you wake up in the morning after a big night out and smell bacon cooking

Sophie’s Choice: If I wasn’t at the Russian Imperial Banquet I’d be at An Evening with Yeastie Boys at East of Everything for 6 beer and 6 courses with one of my favourite NZ brewing guys!

Why I’m going: Aside from the accurate and astounding alliteration (geddit?!) this event showcases two of my favourite breweries

Excitement Level: Kid in candy store but instead of a kid it’s me and instead of candy it’s awesome beer!

Sophie’s Choice: If I wasn’t at Garage Project & Moon Dog’s Local Taphouse takeover I’d be at The Baird Beer Omakase.

Wednesday 21 May
The Event: Sourfest II [sold out]

Why I’m going: I need more sour beers in my life, I truly do. This event was a sell out last year and I didn’t get along. I hear it was amazing so I’m super keen to check it out in 2014.

Excitement Level: When you finally see that band you love live in concert and you sing too loud during every song

Sophie’s Choice: If I wasn’t going to Sourfest II I’d be at Brewers and Chewers at The Local Taphouse. Much like Sourfest this was a sold out night in 2013. Speed dating crossed with a meet the brewer session over a fantastic dinner with the wonderful Pete Mitcham hosting, if last year was anything to go by, this event is a highlight.

Thursday 22 May
The Event: The Cheese and Cask Ale Experience

Why I’m going: It’s a cheese event, enough said. Plus I went to last year’s edition, which was not cask ale, and it was great! The pairings were genuinely tasty and interesting, I can’t wait to see what they do with cask ales.

Excitement Level: Whenever I step foot into The Re-Store in Leederville … times a hundred.

Sophie’s Choice: If I wasn’t at The Cheese and Cask Ale Experience I’d be at the AIBA Awards Presentation Dinner to cheer on and mingle with the great beer people.

Friday 23 May
The Event: Game of Cones

Why I’m going: To see some of my favourite people doing their favourite things – Colonial Brewing and Beersine team up for a beer and food matching session on board a tramcar. I’m sooo on board for this one (toot toot!)

Excitement Level: When you’re six years ago and just about to go to your best friend in the whole wide worlds birthday party and you know there’s going to be a magician, fairy bread and lots of cake!

Sophie’s Choice: No choice, it was always going to Game of Cones!

Saturday 24 May
The Event: The Great Australasian Beer SpecTAPular

Why I’m going: Because it would borderline on insanity not to go. This is the beer festival to end all beer festivals, like a great barley wine this event gets better with every year. Food stalls, craft beer college, the beer market place and the shining diamond on the crown – the festival beers. Over 100 beers brewed just for the festival. Where else can you try that many brand new, never before released, beers in one place?!

Excitement Level: Remember that kid from earlier who drank the red cordial and went to Disneyland? Now they’re at the gift shop being told they can take whatever they can carry.

Sophie’s Choice: If I wasn’t as the first Saturday GABS session I’d be at Woods of the North at 3 Ravens Brewery for barrel-aged brews, whiskeys, BBQ and boilermakers! Breweries like Feral, Moondog , Boatrocker and Starward will be there for your drinking pleasure.

Why I’m going: I missed out last year, opting not to follow a multiple course lunch with a degustation dinner, I was keen to get along this year. Four chefs, six brewers and I think I’ll be rolling out the door of this one!

Excitement Level: When they finally announce the new Doctor Who series (sorry for the second Doctor Who reference of the post but I’m getting frustrated at waiting so long between seasons).

Sophie’s Choice: If I wasn’t at Mega Dega II I’d probably be at the GABS Saturday night session!

Why I’m going: This was the wild card event of my GBW experience last year. It’s on the last day of the week and it is an EPIC week of palate abuse and indulgence and this event, though ever so slightly earlier than others at 11am is such a welcome treat for those who like their wild and sour beers. They welcome you like family, hell even one of the brewers friends even dropped my partner and I back to St Kilda in her own car last year, and it a really lovely few hours at the Boatrocker brewery.

Excitement Level: When you step off the plane in that city you’ve always wanted to explore.

Sophie’s Choice: Let’s face it, if I wasn’t at Boatrocker I’d be at the last GABS session. Hell, if I made haste I could even catch the last 30mins of GABS straight after Boatrocker! 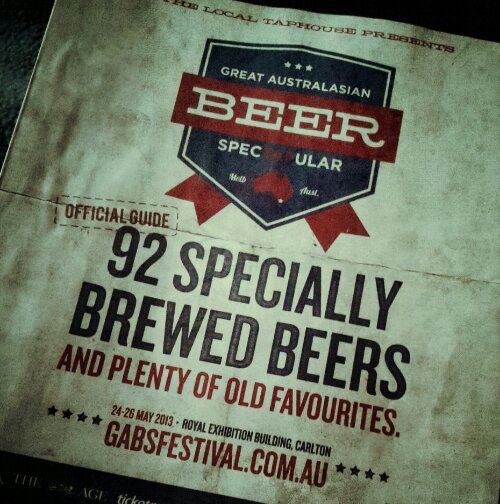 The Great Australasian Beer SpecTAPular, aka GABS, begins today and offers “92 specialty brewed beers and plenty of old favourites”. Amongst those 92 GABS beers are a handful from the south west including one from Cheeky Monkey, Margaret River.

What beer are you doing for GABS?

It’s an Imperial Red Ale weighing in at 7.1% and hopped to fuck

What was the inspiration for it?

Me – Big Red. Haha, nah. It’s just a decent Autumnal style which will carry on into winter. Big, Malty and hoppy.

What flavours are you aiming for?

Big caramalty, full on flavoured hoppy beast of a beer.

What will be/was the most challenging part of this brew?

Restraint when it’s ready for drinking.

Which malts and hops are you using and what made you chose these?

It’s a malty beer so it’s got a broad spectrum malts in it. The three main contenders are Maris Otter, Cara malt and Munich with varying degrees of crystal/cara malts a touch of roast, wheat and acidulated. Hops are lots of Columbus, Centennial, Amarillio, Simcoe and Nelson Sauvin. It will be dry hopped at least three times throughout conditioning.

Which other GABS beers are you looking forward to trying?

Haven’t had the luxury of time to sit down and check them out I’m afraid. I’ll probably have a good look when I’m on the flight over.

If your GABS beer was a person, what outfit would he/she be wearing?

Hmmmm… She’d be wearing a corset with a knee-length tartan skirt and stockings into an pair of old, well worn Doc Martins. Obviously she’d be a Red Head.

The Cheeky Monkey Imperial Red Ale is beer number 23 and can be found at Bars 1 & 2, section 2