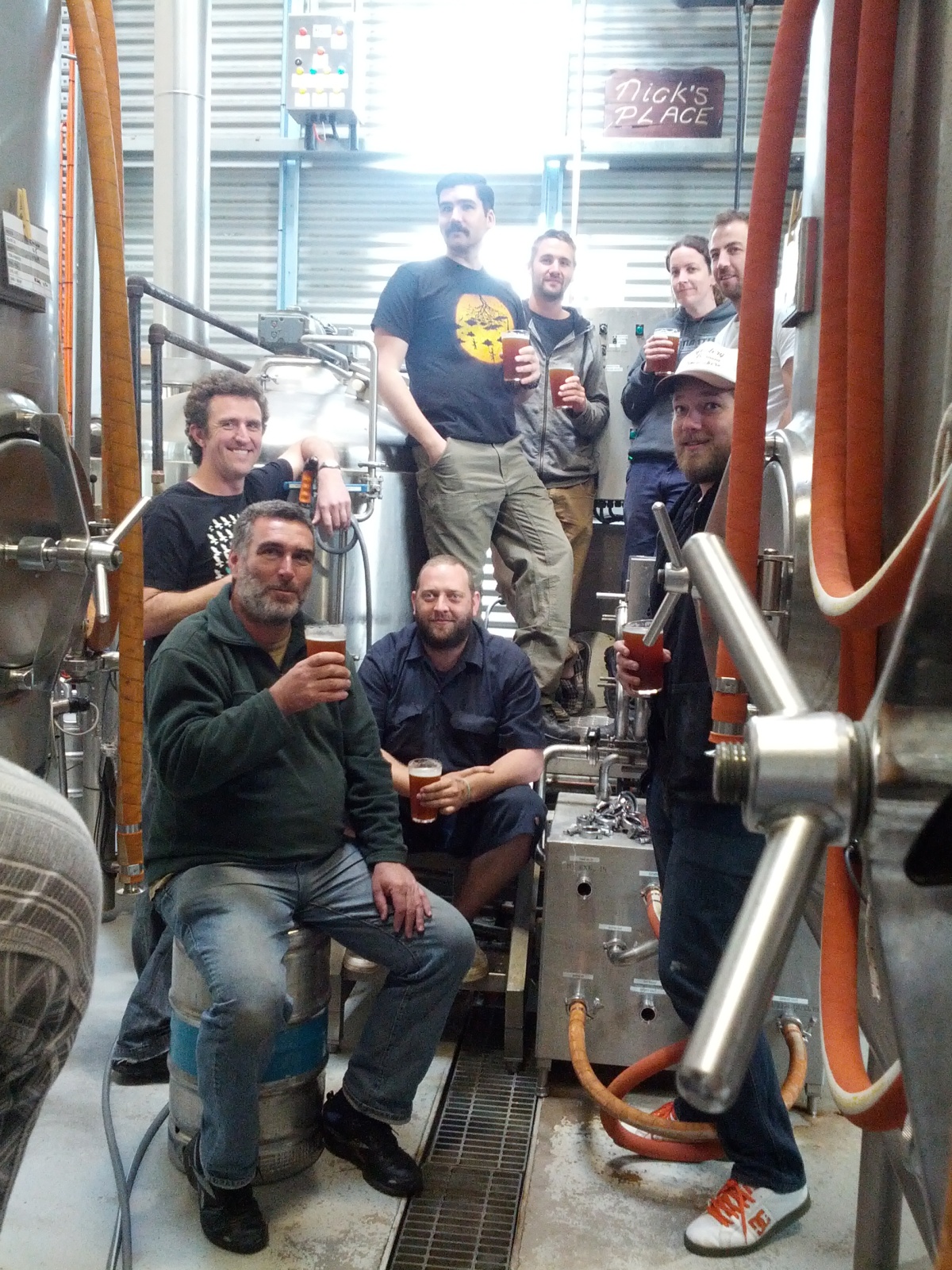 I recently was lucky enough to be invited along to a collaboration brew day and I know it feels like there’s a new collab every second day but I still love ’em. Perhaps it’s because I’ve yet to come across one that wasn’t a genuinely good beer or perhaps it’s because I just love the idea of brewers getting together to do the thing they love. If you’re super keen you can read more about my love for collaborations here.

This particular collaboration is extra special because it was brewers from the south west coming together under one roof, in one brewhouse and with multiple pints. Despite the fact their breweries are all roughly within an hours drive of each other this collaboration is a first for the region, as far as I am aware anyway. The collaboration included Colonial Brewing, Bootleg Brewing, Eagle Bay Brewing, Cowaramup Brewing, Duckstein Brewing and Cheeky Monkey Brewing and the brew day was done at Eagle Bay. For a full run down check out my article for Crafty Pint here.

The beer will make it’s debut at South West in the City, a Five Bar event where the brewers will also be there to engage in all sorts of beer-geek talk or just say g’day. Each brewery will also bring along one of their own beers so there’s plenty south west goodness available; apologies if that sounded a little dirty. The event will be held on Sunday 27th October, two weeks before WA Beer Week kicks off – think of it as a good warm up exercise!

Anyway, I just wanted to share a few photos I took on the day and some of the more memorable quotes and moments that put a smile on my face …

“Are we putting more hops in this or are we making Swan Draught?”

“I only put honey on my toast or in my Lemsip”

“I want to be in Victoria’s Secret”

“This is the Rolls Royce of brewery drainage”

When Jeremy Good, co-owner and head brewer at Cowaramup Brewing, invited me along to the brewery’s 7th annual beer dinner I would have been a fool to say no. And I ain’t no fool. 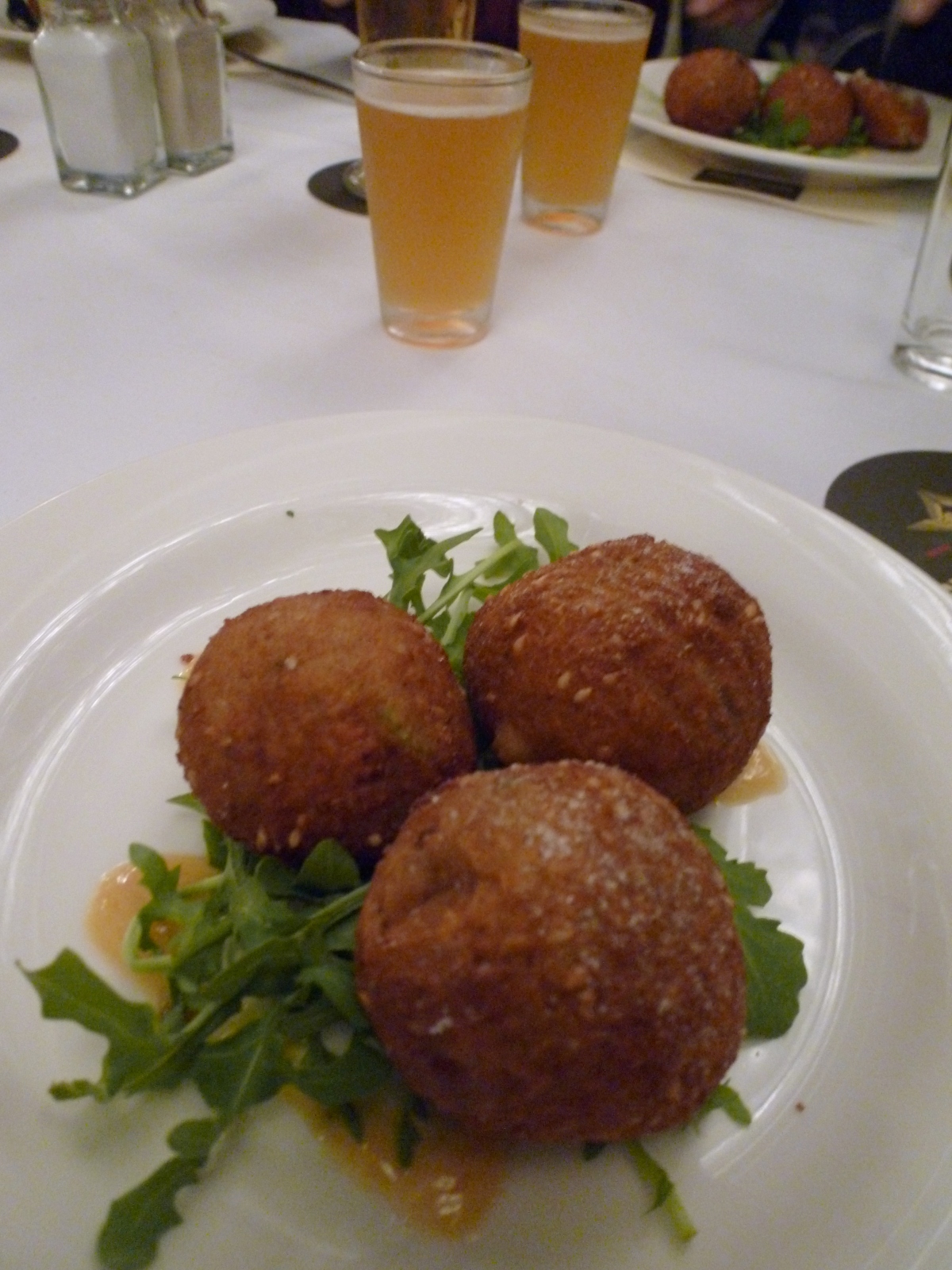 “Beer dinner”, the words just roll so nicely off the tongue. Beer … dinner …

So when Jeremy Good, co-owner and head brewer at Cowaramup Brewing, invited me along to the brewery’s 7th annual beer dinner I would have been a fool to say no. And I ain’t no fool.

Jeremy hosted the evening with the aid of an empty pint glass and a knife to rattle around in it, boys and girls you should remember that for the next time you have to do speeches at weddings. It gets attention, trust me.

Over five dishes matched to Cowaramup beers we all quickly warmed up over what was a very cold and foggy Saturday night.

A nice gentle pairing to start the evening with the soft, almost sweet flavours in the beer not overpowering the arancini.

Refreshing with low to mid bitterness, Jeremy hoped the Lightsign would act as a good compliment to the sashimi. The sweetish fresh salmon went well with the fruitiness and soft spices of the Lightsign. The wasabi was very mild but then again if it had been any stronger it would have thumped the beer. For me the only part of the pairing that didn’t quite gel were the capers; the saltiness seemed at odds with the beer but outside of that capers and salmon are joy together.

I must confess I thought this was a typo when I read the menu but low and behold a nice little pork dish landed in front of me. The Special Ale Ale had a lovely spiciness that was an easy compliment to the pork and mushroom sauce.

Jeremy chose the India Pale Ale to compliment and the Pilsner to cleanse. Special guest chef and supplier of the goat was Shane Blount from the local Cowaramup Butchers, incidentally I think their tagline “meats to please you” is simply amazing. 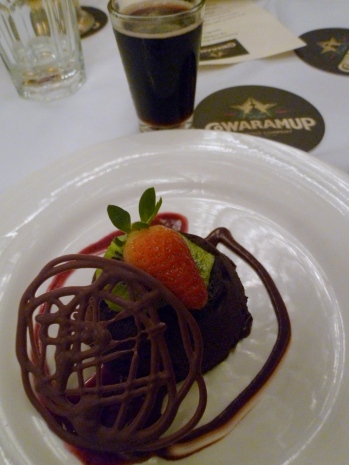 Chocolate and porter … it’s hard to go wrong there and a great way to end the night.

“They say all good things must come to an end … but I’ll have a drink when I get home”, and with that Jeremy closed the evening.

Couldn’t have said it better myself!