Hosted by GrainCru and held at The Precinct, Meet the Man Behind the Bull showcased 8 Holgate beers with brewer/owner Paul Holgate

The food at The Precinct has always left with me a full stomach and a big smile so when I saw there was a beer event featuring Holgate Brewery I was eager to get my grubby hands on a couple of virtual tickets.

“Meet the Man Behind the Bull” was hosted by GrainCru (aka Cellarbrations Carlisle) and Grape & Grain Distributors and held at The Precinct on Thursday night. Over a delicious grazing dinner we sampled eight great beers, including Holgate special reserves, and got to chat with brewer/owner Paul Holgate.

Holgate Brewery is about an hour out of Melbourne and they’ve been kicking around the craft beer scene since 1999. Like many of our fine Australian brewers Paul started off home brewing. On a trip to the United States with his wife Natasha in 1997 they saw many craft brewers opening up, “they were ordinary guys having a go,” Paul had observed and the idea that he and Natasha could do the same didn’t seem so crazy. Together they start the brewery in 1999, also have their first child, and continue their day jobs for a couple of years. Today their brewery is also a pub and accommodation and yes, the day jobs are long gone!

From the start of the evening Paul’s passion was very clear, particularly when it comes to their authenticity. All beers are brewed onsite in Woodend Victoria, all bottling and kegging is all done there too. “We make it ourselves” stands clear on the brewery website and Paul is steadfast on that statement.

The dinner kicked off with Holgate’s best selling beer, the Mt Macedon Pale Ale, named after the Mt Macedon mountain peak that sits in the brewery’s scenery.

It’s the 3rd beer they ever released and brewed with US hops and dry hopped with three varieties. Due to the seasonal nature and availability of hops Paul may tweak the recipe here and there where needed. This was my first time tasting the beer and it’s easy to see why it’s the most popular – full flavoured but nothing confronting, I got a delicate blend of peach, pineapple and citrus that could be easily enjoyed by the pint-ful.

Next up we had the Roadtrip American IPA, the beer is a tribute Paul and Natasha’s family holiday to the United States in 2009, 10 years after they first opened the brewery. At dinner Paul recounted the agreement they had set with their kids, be good whilst mum and dad check out all these breweries and we’ll take you to Disneyland after.

They went to Disneyland.

A note on the popcorn – it’s earth shatteringly good, eating any other popcorn will forever suck. 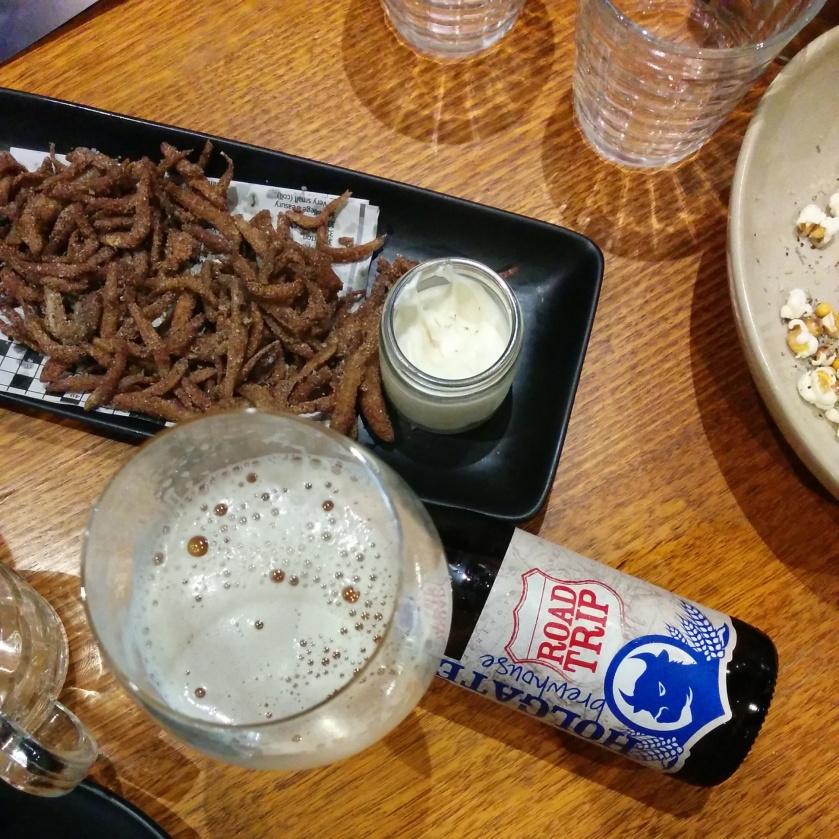 Continuing down the path of hops we had the Hopinator, an American Double IPA. Not nearly as bitter as I would have predicted given it’s 80 IBU declaration on the label. I loved the sweet caramel and toffee malt characters that supported fresh bright hops. The beer uses American Chinook, Centennial and Citra together with Australian Topaz.

Around here some more food came out – a pig’s head terrine that was dark chocolate in colour, served with crostini and a smear of tangy mustard. The terrine was rich and flavoursome and the mustard provided a great contrast. Highly recommend this dish at your next Precinct visit. 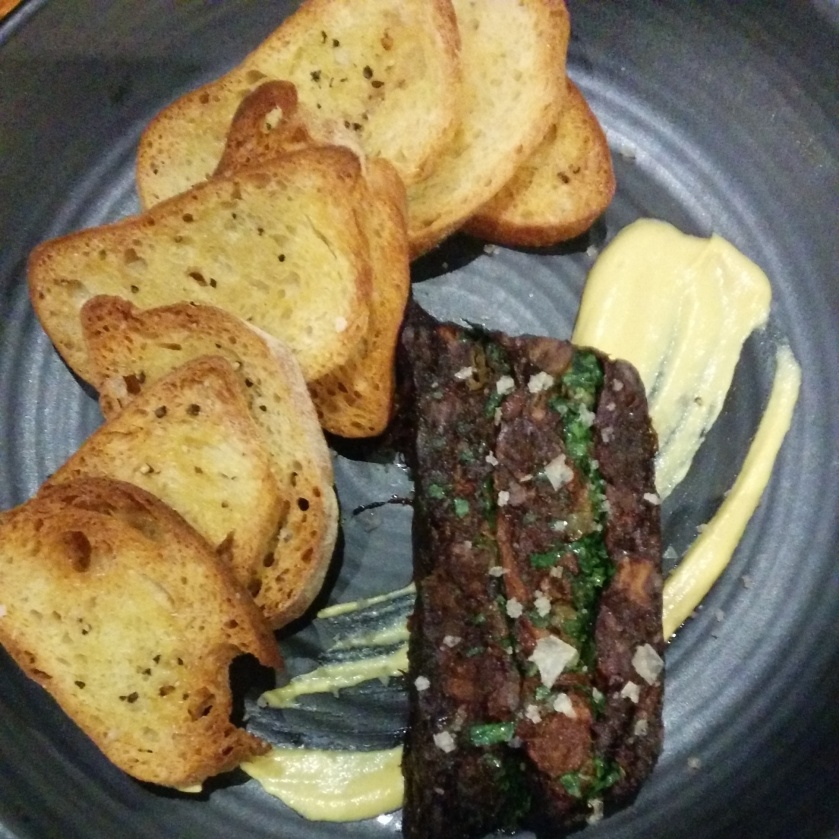 More on the White Ale here at Crafty Pint

Moving from hops to yeast, the fourth beer was the White Ale. Originally one of the first beers Holgate brewed it has since returned as a limited release and gone through a couple of recipe tweaks. The bottle we had was from a batch to celebrate the brewery’s 15th birthday. Made with coriander seeds and fresh organic grapefruit, it’s one of the better wheat beers going around and perfect for providing some cut through on those meatballs and highlighting the coriander salsa.

From here we started down a far darker path with Holgate’s Temptress. This is the first beer I had ever tried from the Holgate range a couple of years ago and it made a lasting impression on me. It’s a chocolate porter that is silky smooth and beautiful. It’s made with Dutch Cocoa and whole vanilla bean.

This was followed by a beer from Holgate’s Special Reserve list, Double Trouble – a Belgian-style Dubbel Abbey Ale brewed with Belgian candi sugar.

Mains were served up here too – Black Angus Sirloin and seasonal mushrooms with truffle oil. The meat was perfectly cooked and the mushrooms bursting with aromas of truffle oil.

The Double Trouble is suitably named as it falls into that category of “dangerously drinkable” given it’s 8% ABV and disappears from your glass quicker than you may like to admit. I got a hit of liquorice on the nose and the flavour follows with chocolate, red berries, coffee and a dusty rounded finish.

Next up from Holgate’s Special Reserve list was the Empress, the big sister of Temptress, an Imperial Mocha Porter weighing in at 10% ABV. Brewing Empress begins just like her little sister with vanilla bean and Dutch Cocoa, the big difference between the two is the addition of coffee. They add what Paul described as a “cold coffee tea” and this brings out the rich fruity coffee flavours rather than the astringency. However they do it, the result is something to savour, sip and share. 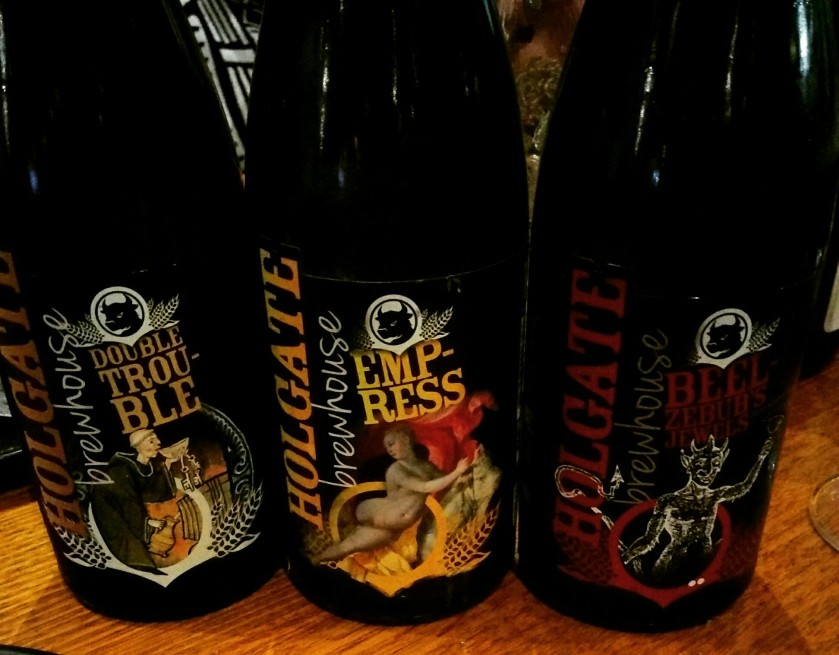 The final beer for the night was a doozy, a word I don’t think I have ever used in the written format, and I even went and bought a bottle from Mane Liquor the next day. Holgate Beelzebub’s Jewels, another special reserve beer and apparently the name means “devil’s nuts”, is an oak-aged Belgian-style quadruple. That sort of style makes beer geeks weak at the knees and then to try it, to taste it and love it, well it’s a pretty wonderful kind of thing. Non-beer drinkers should also give this sort of beer a taste, it would be beautiful sipped on with a chocolate dessert or a cheese board. The bottle we shared was from 2013 and it’s oak aged in pinot noir barrels. I loved the nose of sultana, port and spice and I could easily spend a whole night just sipping on this beer.

Throughout the dinner we got to pick Paul’s brain about his beers, his approach to brewing and his brewery. I also got to chat with him about general craft beer things like contract brewing, in which he believes there needs to be greater transparency and I wholeheartedly agree, and where beer trends get momentum.

On the brewery front Holgate have established a barrel aging program so I am excited to see what beers come as a result. Like many brewers Paul and his brewers at Holgate seem to be guided by the simple goal of brewing beers they would like to drink themselves. It appears I have the same tastes in beers so I think I’ll be watching Holgate a lot more closely from now on!

The full line up of Holgate beers sampled on the night

This was a really good night of beer, chat and fantastic food. Huge thanks to Paul, Joel & Adam at Cellarbrations Carlisle, Dan, Josh and the chefs at The Precinct and everyone else involved in such a top night.