Just when you thought my Good Beer Week / Melbourne related posts had finally come to an end here’s another one! My final (I think) post about Melbourne is centered around the John Curtin Hotel on Lygon Street. 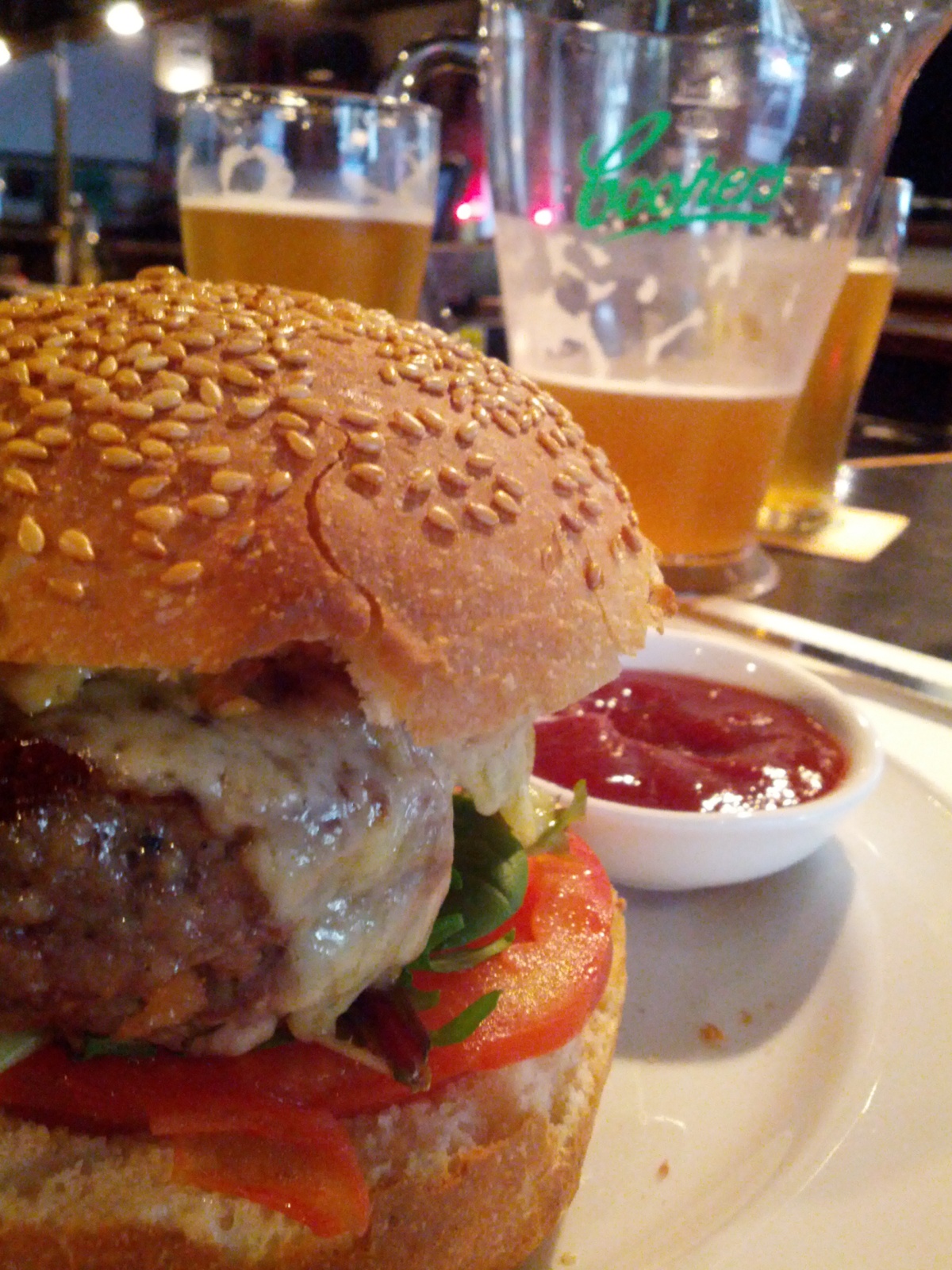 Just when you thought my Good Beer Week / Melbourne related posts had finally come to an end here’s another one!

My final (I think) post about Melbourne is centered around the John Curtin Hotel on Lygon Street.

My partner and I arrived at 3.15pm after a day of shopping for last minute presents, a snack from La Petite Creperie and a quick few ales at Young & Jackson.

We needed a big feed; we were airport bound in a couple of hours and did not want to subject ourselves to airplane food of toasted sandwiches and two minute noodles. Don’t get me wrong, both foods are fantastic but only when I’m at home – there’s an art to toasties and instant noodles.

Anyway, back to the pub.

We were hungry and perched ourselves at the bar, ready for a big burger and some beer.

Then we encountered one of the things I dislike most in pubs – “sorry, the kitchen isn’t open yet”. We were 45 minutes too early. But then a funny thing happened, the bartender said the chef was already in the kitchen so she’d ask if he’d take the order.

Wow, we thought, that’s nice of her.

“That’s fine, you can order”, she said when she returned.

Wow, we thought, that’s a pretty nice chef you have back there!

I know it’s only a small thing but it was hospitality at its best. I have not encountered many venues who would have done this and I think it deserves recognition. 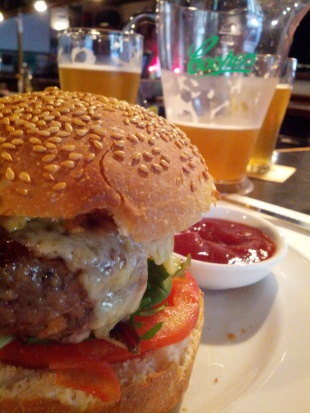 Not only was the service over and above what we expected the burgers were freakin’ delightful. Perfect with a shared jug of Coopers Pale Ale.

Yep, we were now ready to get on a plane and fall asleep. 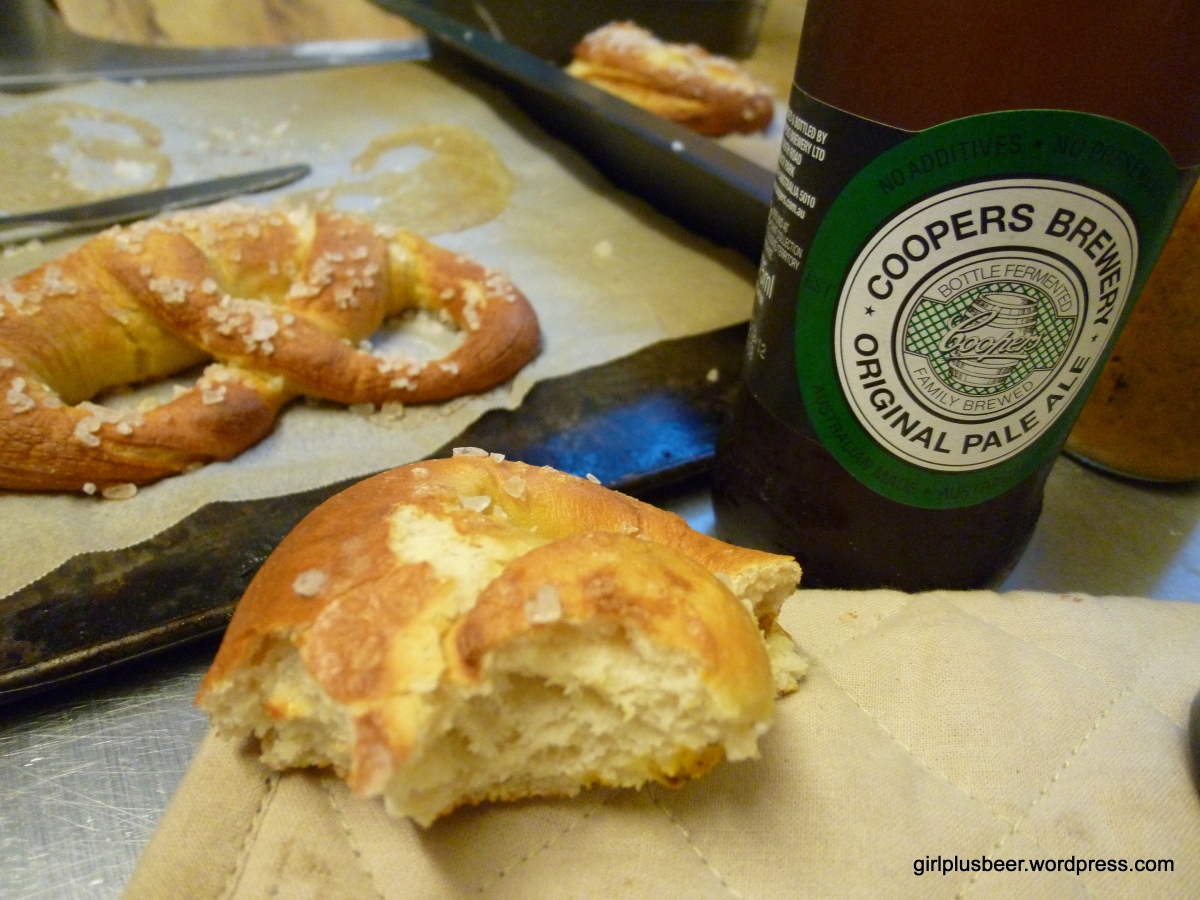 The biggest mistake I made with the pretzels was only making five.

Another great recipe taken from Paul Mercurio’s Cooking with Beer cookbook, although this doesn’t have any beer as an ingredient it’s certainly a beer worthy food.

I’ve been making a few bread related foods lately and the recipes always assume you have a fancy machine and a “dough attachment”. We don’t have a fancy machine, mostly because we’ve never needed one (dough pun!), but as I was kneading out the dough by hand I thought to myself that this was WAY more fun than watching a machine.

Once kneaded the dough has to rest and grow.  The hot tip in the book is to spray a little oil into the bowl before you put the dough in to rest making it much easier to get out of the bowl later – just don’t forget to spray the whole bowl as the dough grows to about double it’s starting size.

I didn’t put too much thought into the beer matching side of things here, we had a case of Coopers Pale Ale so we had one (or two) of them. Having said that, it was a pretty good pairing of floral pale ale with sweet breadiness. They also went really well when dabbed with a little Kick Ass Hot Beer Mustard! Now that I (kinda) know what I’m doing I think there’s a lot of fun that can be had with making different pretzels and beer matching …

Trying out Sticky Chicken Wings (using Coopers Pale instead of Sake since I had no sake!) matched with the latest Little Creatures Single Batch – The Day of the Long Shadow (and even longer beer name that makes it a real mouthful!) …

The latest Little Creatures Single Batch ‘The Day of the Long Shadow’ is a big mouthful not just in the extensive name but also the beer itself.

Styled with a cold European Christmas in mind; it’s a boozy 8.9% abv that smacks you lovingly in the face but it’s nicely balanced with assorted spices and dark fruits. Whilst Little Creatures are normally known for a more American hop approach they have used UK Sovereign and Challenger hops. These English hops lend softer and more earthy characteristics with Challenger hops, in particular, providing fruitiness and sutble spices. There is a little bit of bitterness lurking about as well so I thought a dish with some contrasting bitter/sweet flavours could be an interesting match.

I flicked through Bill’s Everyday Asian and landed on a recipe for Sticky Sesame Chicken Wings. The contrasting soy, chilli and sugar sounded like it could work up against the Little Creatures “the day of the long tea time of the soul darkness etc etc” but at the same time I had my doubts however I liked the sound of the dish and couldn’t be bothered looking into it any further. I had briefly contemplated something Christmas inspired, in keeping with the theme, but I really didn’t have the time to be trying to roast a leg of ham or turkey and fruitcake isn’t really dinner appropriate. I had also committed myself to cooking three other dishes that night (related to other occasions) so I was inclined to get on with it!

I kinda followed the recipe however we didn’t have Sake so I just used the nearest booze in arms reach … in went a generous dash of Coopers Pale Ale. I had palm sugar in hand, which I had purchased for another dish, so I grated some and tossed it through instead of the regular white sugar the book called for because, to be perfectly honest, it felt more asian-y. I ditched the sesame seeds because I just couldn’t be bothered. The result was a recipe that went a little something like this:

Throw chicken wings into a dish lined with baking paper and into a hot oven (200 degrees) for about 35-40 minutes. In a saucepan over medium heat throw in the other ingredients, garlic and chilli first and then the rest. Cook for a few minutes or as long as it takes for the liquid to reduce by about half. Whether this was because of my handful of variations this actually took a good 15 minutes.

After 35-40 minutes remove chicken wings from oven and coat with the sauce, toss through to ensure they are covered. I was a little skeptical at this stage, thinking the sauce wouldn’t stick but after another 15-2o minutes in the oven the result was just as the title promises!

Dinner was sticky and good but sadly not a winning match with the beer with far too much contrast going on between the food and the beer. Ah well, I get another chance at it with a Gauloise Christmas still in the fridge!

But there are beers that you happily return to time and time again, that you’ll take a 6 pack to dinner at a friend’s house, that you’ll reach for in the bottleshop safe in the knowledge you’ll get something you will really enjoy. Coopers Pale Ale most certainly falls into that category for me.

I love the Busselton Jetty, it’s intriguing, romantic and historic all at the same time.

It’s a lovely stroll along 1.8km of timber which apparently makes it the longest timber piled jetty in the Southern Hemisphere; apparently you can’t have a major tourist attraction unless it’s the biggest, longest, tallest, something-est etc. Whether record breaking or not, the walk will take you past people casting lines out into the ocean; there’s significant black splotches on the timber to indicate it’s a good spot for catching squid. There’s a fair few tired looking kids with parents full of encouragement who just want to convince the kid it’s worth getting to the end of the Jetty; always funny to see a temper tantrum in full action. Outside of the great people watching there is, of course, the Jetty itself with the walk taking you along beautiful blue water and the Underwater Observatory going 8 metres below sea level to reveal hundreds of species of marine life. As you walk the Jetty there are stories to be found, bits of history to take in and sections of the old jetty linger as more tangible reminder of what used to be there.

Every visit is a little different. Sometimes I will do the Underwater Observatory, sometimes it’s just a walk to the end and back and sometimes it’s just a quick look before heading into The Goose for some breakfast. I can go and visit the Jetty time and time again and it’s always enjoyable … just like your favourite beer.

But there are beers you happily return to time and time again, that you’ll take a 6 pack to dinner at a friend’s house, that you’ll reach for in the bottleshop safe in the knowledge you’ll get something you will really enjoy. Coopers Pale Ale most certainly falls into that category for me. 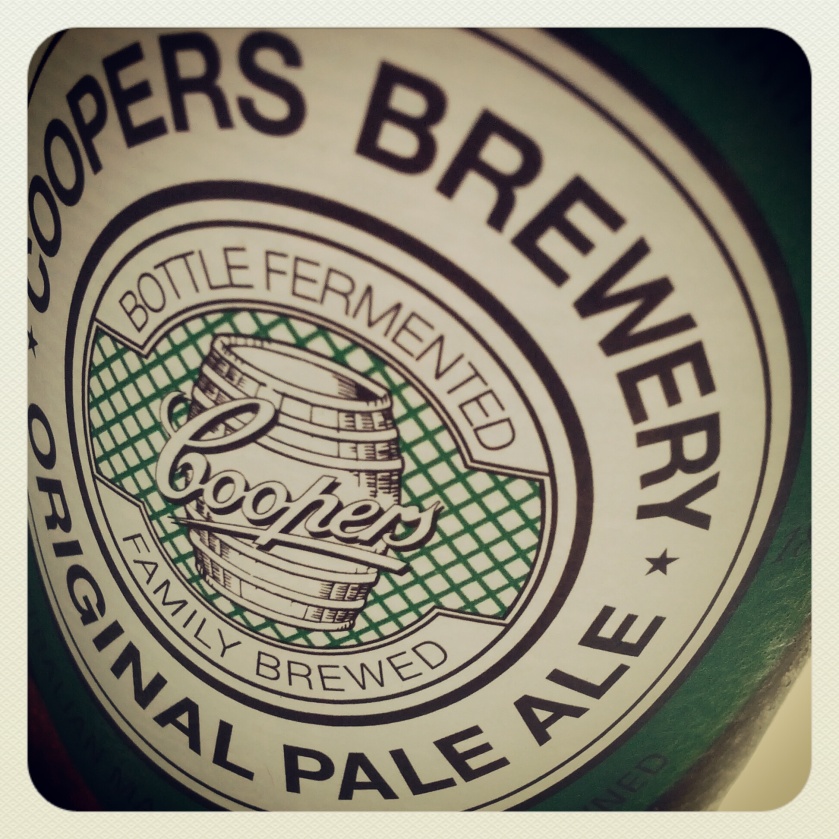 Coopers Pale Ale is brewed without any artificial preservatives or anything nasty like that and it’s bottle conditioned, meaning yeast will go through a secondary fermentation in the bottle after it’s been capped. This processes creates carbon dioxide for natural carbonation rather than using an injection of CO2 to force carbonation. This mean lots of great things for the beer such as longer shelf life, more complex flavours, finer carbonation and better head retention and, all in all, a happier beer.

I might not have spent the weekend trying to cook up some sort of Masterchef inspired dish to match it and it’s not a limited release or a collaboration brew. What it is, however, is a damn fine beer that is fruity with light malt and a pleasantly bitter finish; it is consistently good quality, all Australian owned and with a rich history and all of this for a good price. It’s the beer my boyfriend and I have been enjoying this weekend and it’s nice to remember that great beer isn’t just the one-off cross country collaboration brews but also the home grown, well crafted beers you’ve been drinking for years.