More specifically I’d make a great Belgian monk circa 1800s. Why? Cause much of their time was spent making beer and making cheese

… aside from lots of the God stuff and the no hanky panky rule (I don’t actually call it that but I’m very aware that parental eyes look over this from time to time). But that aside, I think specifically I’d make a great Belgian monk circa 1800s. Why? Cause much of their time was spent making beer and making cheese, two of my favourite things! I guess I would have been a pretty fat monk with a heart condition too. Oh well.

The Beer and Cheese Experience was five beers matched to cheese and presented by James Smith of the Local Taphouse (there must be something about a love of craft beer and this name!) and Pascal Tremblay from Calendar Cheese Company.

We arrived early, being the eager beavers we were, and picked our seats at the long, long table.

With this match James and Pascal tried to “think outside the mould”, I’m not sure how many people actually heard those words but I am sure I did and damn I am a sucker for a good pun!

Our hosts were hoping the beer and cheese would compliment, rather than contrast or cut through. They were right! The toffee, dark fruit sweetness bought out the sweetness in the cheese. I thought textually they were nicely matched too, the lack of carbonation in the beer making for a really smooth mouthfeel with the semi-hard cheese.

I loved the nutty, mushroom rind on the cheese, which was a blend of both goat and sheep’s milk cheese, that just hinted at being creamy without actually being creamy (if that makes any sense to anyone outside my own head).

They had surprised us by opening with a fair full flavoured pairing in the cask conditioned ale and Meli Melo before this one which was a much softer pairing. It was, of course, a deliberate act so that we “started the night with a bang” explained Pascal.

So the first pairing was a wake up call for the palate, now it was time to cleanse a little.

“Every beer in the world is trying to be a pilsner and failing epically at it”, James.

I’d almost forgotten what a nice clean pilsner Budvar was.

The cheese was a Dutch style Gouda that was sweet, a little fruity and I thought had a little melon in there too. It was a beautiful match to the pilsner with it’s subtle spices and it effortlessly washed over the thick mouth feel from the cheese. 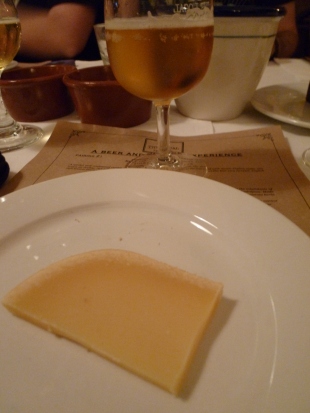 This match was inspired by the English tradition of the ploughman’s lunch, the staples of which are cheese, chutney and accompanied by a beer.

The Lagonda IPA is made with all English hops and malt and arguably this style is a classic match to a good strong cheddar.

This match worked a treat, fruity spicy hops with the rich fruity cheddar with hints of white pepper. The cheese also had a sharp tang not unlike the hop bitterness at the end of the beer.

The cheese was also textually fun – hard but slightly crumbly and I thoroughly enjoyed pulling it apart.

A few years ago when I co-hosted a beer and cheese event at Five Bar with Nick Bath of Blue Cow Cheese, I remember his words of advice around tasting cheese. He emphasised that it was an experience for all your senses, not just your taste buds. He encouraged everyone to pick up the cheese with their
hands, play with it, smell it and look closely before eating it. That advice has stayed with me since. 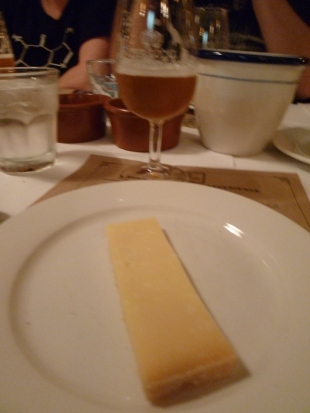 I’ve only just discovered taleggio (thank you Tiff @beergirlbites) so it was great to get a little more insight into this style of cheese. Pascal’s advice was only to buy cave ripened taleggio, not only for authenticity but because it creates a richer, deeper flavour. I can’t wait to sound like a cheese expert when buying my next bit of taleggio!

The beer, Orval, is not one I’ve had since I was 19. Back then I was only just getting into my beers and I hated this beer. I’ve often described it as ‘the worst taste ever but then the after taste is even worse’.

My how things change. This Belgian Trappist beer is funky, it has some oranges and spice happening together with soft tropical fruits.

Ok, it was time to break out the big guns. The Bigfoots port, raisin, spicy fruit cake flavours were going to bump uglies with a creamy, ballsy and slightly ashy blue cheese.

Rich for rich, bold for bold, sweet for sweet, it was a clash of titans with a delicious result.

Thank you Local Taphouse for another top night!

Ashley, James (below left) and Pascal (below right) – thank you all very much, it was a pleasure!