I love discovering my next favourite place where the staff are smiling, the food is delicious and the drinks are good. Bianco Gourmet Pizza Cafe in Bunbury ticks all these boxes and whilst the drinks aren’t alcoholic they do have a BYO policy and, wait for it, there’s no charge! The Rose Hotel bottleshop is conveniently just up the road so put these two places together and it means I’ve found enablers for my regular pizza and beer cravings.

I love discovering my next favourite place where the staff are smiling, the food is delicious and the drinks are good.

Bianco Gourmet Pizza Cafe in Bunbury ticks all these boxes and whilst the drinks aren’t alcoholic they do have a BYO policy and, wait for it, there’s no charge! The Rose Hotel bottleshop is conveniently just up the road so put these two places together and it means I’ve found enablers for my regular pizza and beer cravings.

Another win is that Bianco are big supporters of local produce and boast that their entire menu including pizza sauce, dough, muffins and cakes are all made in house. I reckons that’s pretty cool.

For those watching their wallets, like me who apparently owes the tax department several hundred dollars … sigh, Tuesdays are the “cheapie” nights – two regular traditional pizzas for just $20. Freakin’ tasty bargain.

When my partner and I first visited it was a Tuesday night so we took up the cheapie night deal and got the BBQ Chicken and Carlotta’s Hot and Spicy Pizza. They ask what intensity you’d like on the Hot and Spicy and I shuddered as my partner opted for an 8/10. Thankfully for me it was just enough but, being the chilli fiend that he is, he was hoping for more heat.

Our next visit was after a trip to the movies to see Django Unchained, which is awesome by the way, and that’s when we learned it was BYO. We decided to try pizzas from the Gourmet menu and got the Prawn and Proscuitto and the monthly special which was a Sweet and Chilli Chicken. I ducked up the bottleshop hoping to find a “2 for” deal on Little Creatures Pale Ale Pint bottles and low and behold, there is was – 2 for $11. Done!  The pint size are just perfect for an occasion like this when a 6 pack is a bit overkill but you’d be just getting a taste for it after a normal 330ml stubby. Pale Ale and pizza is kinda like pale ale and burgers, they’re just meant to be but it went particularly well with the prawn and proscuitto, the Creatures citrus hops acting as a nice cleanser for the rich salty proscuitto to come through.

If you’re in the area be sure to bypass all the random Chinese restaurants and head here, you’ll love it.

I like surprises and I like burgers so imagine my delight when I’m surprised by a burger. Allow me to elaborate … 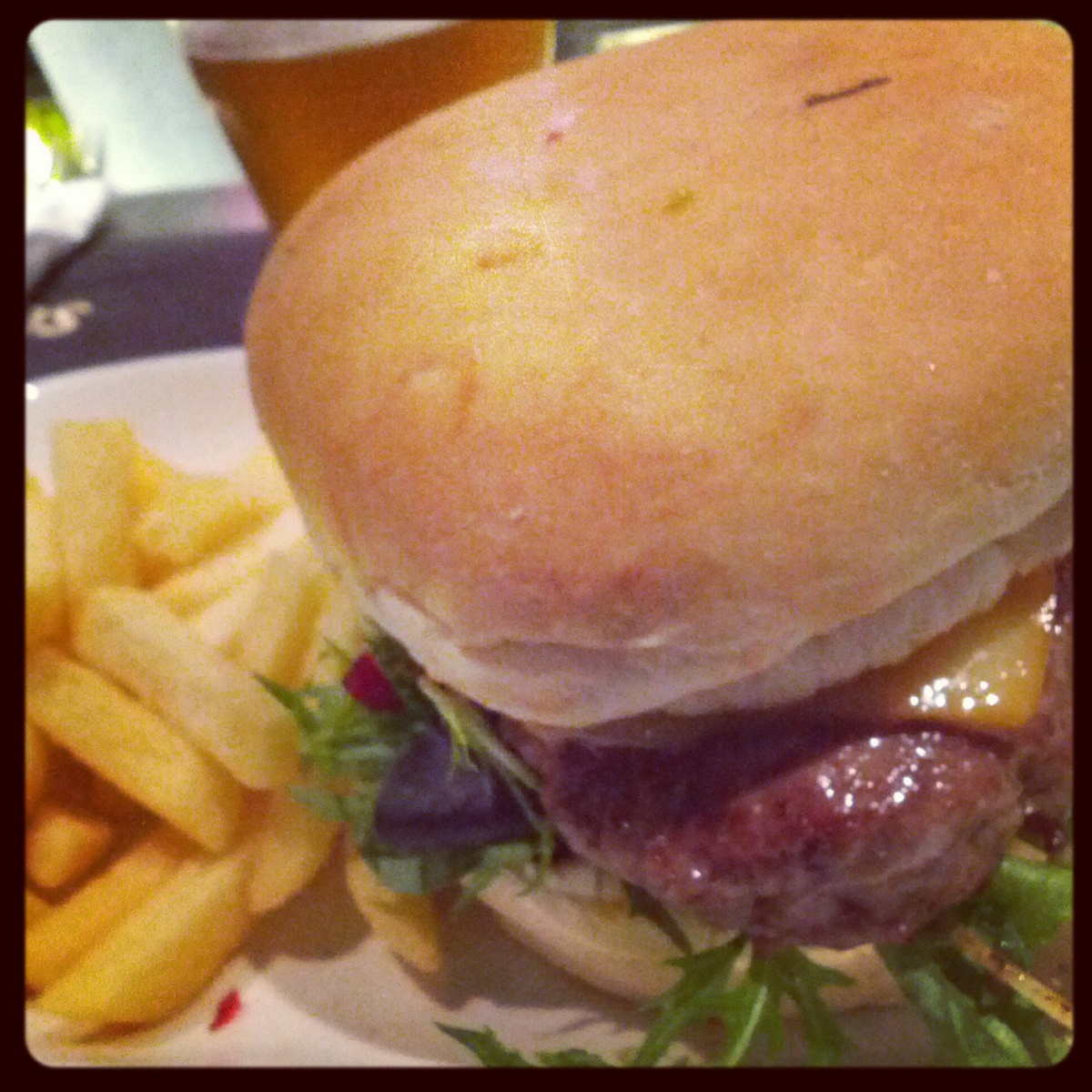 I like surprises and I like burgers so imagine my delight when I’m surprised by a burger. Allow me to elaborate …

We had a couple of days of “wild weather”, as the term goes despite you never hearing about “captive weather”, in Perth and the South West. To look at the trees was as though Mother Nature had taken a chainsaw and decided most of them were just too tall. Big trees were ripped out like pesky weeds, fences went a bit further down the road and some basketball hoops fell down too. You get the idea. So with all this storm stuff going on it was only inevitable to lose power.

On the first night without power my boyfriend cooked 4 packets of 2 minute noodles on the gas stove and that was fine. On the second night, whilst trying to empty the entire fridge into a borrowed esky, we decided it would be a whole lot easier to head to the pub.

The side entrance was locked and looked closed; a drive to the front revealed unlocked doors under a neon sign of the letters HH. We walked in to find a handful of tables in the restaurant area and the bar dotted with blokes and pints. They were yelling helpfully at the bartender as she tried to get to the Foxtel channel they wanted, displayed on 3 screens above the bar.

We were very pleased and somewhat surprised to find Nail Ale Australian Pale Ale on tap given the venue doesn’t hint to any sort of craft beer culture. It’s also not a common beer to find  on tap, though this is set to change with Nail Ale and Perth’s other well known brewery, Feral, sharing a new brewhouse in Bassendean, so it’s great to see it around. With a credit card behind the bar, two pints in front of us and the tennis French Open on the screens our Monday night was going fairly well.

Like most Woolworth’s owned ALH (Australian Leisure & Hospitality) pubs the venue was littered with promotional posters, one of which was the Monday night special “Burger n Beer Deal” for $15. We thought, what the hell, its almost alliteration and it makes ordering easy, and got the deal x 2.

I must admit our expectations where not high because a) Its Woolies b) Its a meal deal and c) You don’t normally associate neon lights with good food. Not that we were expecting bad food but we were not expecting a very tasty burger with lots of nice extras.

The burger presented nicely in a focaccia bun and the patty was thick, a good start so far and to see all the little extras was a delightful surprise; finely diced beetroot, cheese, bacon that hadn’t been fried to within an inch of its life, rocket and cherry tomatoes were all big ticks from me! And the chips, though most certainly bulk purchased frozen McCain, were crisp and yummy.

We each got another pint of Nail Ale whilst we finished off our burgers; Pale Ale and Burgers are such a good match! I think it’s the fruity elements of the beer bringing out sweetness in the meat, tomatoes and beetroot but enough bitterness to make sure it doesn’t get slapped around by a big juicy burger! We watched the end of the tennis and then went to pay the bill. I had been expecting to have to pay over and above the “meal deal” because we had chosen Nail Ale instead of something more mainstream but it was included and for four pints and two burgers, I thought $50 was a pretty decent asking. The service had also been good, the girl behind the bar was friendly and checked to see if we wanted more drinks and had clearly away our plates promptly.