Obviously Little Creatures + White Rabbit = Little Rabbit. It couldn’t have been any other name. There’s something about the words ‘White Creature’ that feel a little politically incorrect.

Whilst enviously reading through the Good Beer Week events I clicked to see what Little Creatures were going to be up to. Being a former Little Creature myself, I like keeping up with what they are doing. I used to spend my days driving around listening to Rage Against the Machine and  selling the almighty Pale Ale to bottle shops and bars. Despite a few years passing by I am fortunate enough to still know a few friendly faces at Little Creatures. As such, when I spotted a collaborative beer between Little Creatures and White Rabbit brewed especially for the Great Australasian Beer Spectapular (GABS) at Good Beer Week it caused me to pick up the phone. One email and a phone call later I learnt that a few kegs would be making their way back to Fremantle after Melbourne’s Good Beer Week. Availability outside the brewery was very uncertain, after all we are literally talking about just a handful of kegs, so I decided the only thing to do was to drive up to Fremantle and get it from the source. 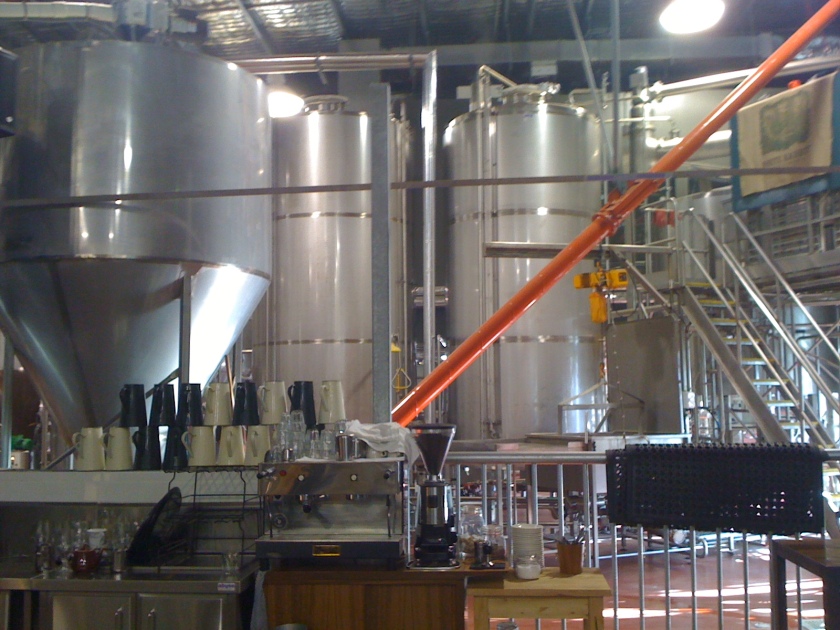 Early days at White Rabbit Brewery
Healesville, Victoria
The Back Story: The White Rabbit Brewery in Healesville is brought to you by the same people as Little Creatures so perhaps it was only inevitable that a collaborative brew would hop-up (pun-tastic, I know. I’m sorry, please keep reading). White Rabbit beers, their White Ale and Dark Ale, are driven by yeast and open vat fermentation and letting the yeast be free (to a degree). Little Creatures is driven by hops and a naked flying baby.

I gathered up two friends to come along for an adventure to Fremantle. We arrived at Little Creatures and head straight for the Brewhouse Bar (not the main hall), where you can taste beer and purchase some to take home with you, along with plenty-o-merchandise. It also gave me a chance to show off a little knowledge and point out where the bunnies are having sex on all White Rabbit branding (bottles, tshirts, packaging, it’s always there!).

We had a taste, chatted to the great Brewhouse Bar staff and glanced over the spec sheet. A taste was quickly followed by a pint. We sat in the sunshine, admiring the red Little Creatures bicycles and the assorted herbs and veggies growing in the surrounds.

The beautiful sunny day let Little Rabbit show off her appearance, light golden clarity and fluffy white head. The brew holds true to it’s White Rabbit father with Belgian yeast shining through, dry and a bit spicy. It’s Little Creatures mother imparts a little orange citrus and glimpses of passionfruit from her hops. The bitterness is long lasting and crisp, weighting in at about 37 IBU if my memory of the spec sheet that was at the bar serves me correctly.

Get down to Little Creatures and try this out, I have no idea if it will come around ever again but I know the batch I had won’t be around for long. They had already drained one keg when I was there and there was just two to go. Hop on in …