I had the pleasure of interviewing Jasper from Camden Town Brewery, London, when he was in Perth in May

As you have probably gathered from the title of this post, there is a part one, if you’re looking for it you can find it here.

Jasper of Camden Town Brewery (London) was recently in Perth talking beer and enjoying the sunshine. I was lucky enough to get the chance to interview Jasper over a coffee and some breakfast.

We chatted for over an hour about how Camden came to be in Australia, the craft beer scene in the UK compared to here, the need for a definition on craft beer, the formation of a new association for British craft brewers – United Craft Brewers, Camden’s sour program and the new brewery Camden are building. In short, we talked a lot about some really cool stuff.

Big thanks to Sarah from Memorable Drinks and Jasper from Camden Town Brewery for letting me conduct this interview on such short notice and with such a tight schedule, much appreciated.

Jasper and I at Gordon St Garage, thanks to Sarah (Memorable Drinks) for the photo

Here we go with Part Two …

I wasn’t aware that Gentlemen’s Wit is open fermented nor did I know the inspiration behind the beer, especially given Camden are mostly a lager brewery.

Inspiration for Gentlemen’s Wit came from a dark hefeweizen brewed by the Alios Unertl of Unertl Brewery in Germany. Jasper had met Alios whilst in Germany,

“I went to his brewery and he’s got a 50 thousand hectalitre brewery in his house, literally it’s in his house. You walk through his stairs and the 40 hectalitre mash tun has a dishwasher on one side and washing machine on the other side,” Jasper described.

“He is the most awesome man and massively inspirational to me as a brewer.”

The brewery is named after the family and on their first meeting Alios told Jasper his father’s story.

Alios’s father had been a prisoner of war, he was going to be killed by the Russians but was saved by the British military. “When I met him he told me the story of his dad but how he had never been to England but without England he wouldn’t be alive,” Jasper said. “When you build your brewery I will come,” Alios had said to Jasper and the week Camden Town Brewery was commissioned Alios visited the brewery as promised.

“He came to the brewery and he brewed his hefeweizen with me. He bought his yeast strain and everything, it was amazing.”

Jasper went on to describe the open fermenters he had seen in Bavaria. “Traditionally if you go to Bavaria all Hefeweizens are always open fermented,” he said.  He recalled the huge tanks, the way the yeast poured over the side into buckets underneath the tanks for collection and reuse to the next fermentation tanks. “It’s an evolutionary cycle,” he said. “Normally you go to a German brewery and the open fermenters are in a room so they are controlled and you don’t get airborne bacteria. Well ours isn’t.”

“We had one that got infected so we took the infected Wit and put it into barrels and that’s how we had our first sour,” Jasper said. “So we don’t introduce any yeast strains to it, just wild and it tasted awesome so that was where we started.” 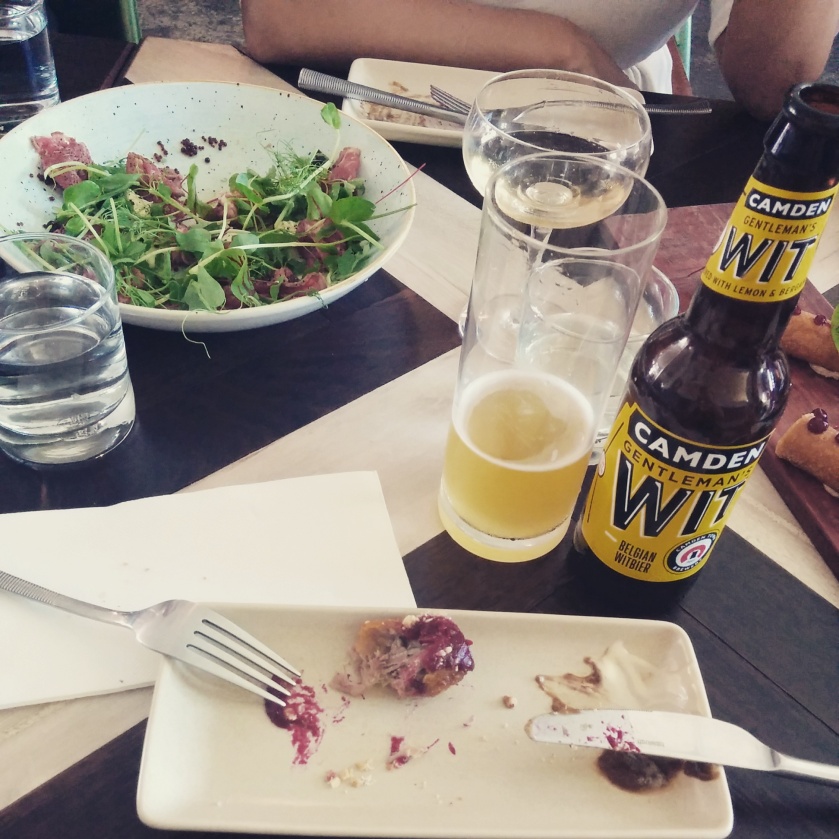 The words “we have a sour program” uttered by any brewer right now will make all beer geeks more excited than when double IPA’s started to emerge.

“You can get a lot of flavour in a beer that doesn’t have a lot of alcohol, that’s one thing I like about sours.”

Though it was the infection of some Gentlemen’s Wit that sparked Camden’s sour program, it was probably inevitable. “There was a desire from the brewers who wanted to do it and a desire from me wanting to drink it,” Jasper said.

So there are currently 30 barrels of infected Gentlemen’s Wit at Camden Town Brewery and, should all go well, they’ll be hand bottled and ready for release about April/May 2016. We might even see some in Australia.

Part Three of my interview with Jasper will cover our chat about the definition of craft beer and the formation of the UK’s new association – United Craft Brewers.