I didn’t see any roses or any heart shaped boxes filled with chocolates on Valentine’s Day this year and I wouldn’t have had it any other way. Instead I was at the South West Craft Beer Festival!

I didn’t see any roses or any heart shaped boxes filled with chocolates on Valentine’s Day this year and I wouldn’t have had it any other way. Instead I spent the years most socially pressured romantic day of the year drinking great locally produced beers in the company of the fabulous personalities who brew it and sell it. Trust me, there was no lacking in love at this years South West Craft Beer Festival which was held last weekend.

Old Broadwater Farm in Busselton is a gorgeous setting for a beer festival, plenty of open space and shady trees and though it’s near the highway you’d never know it. 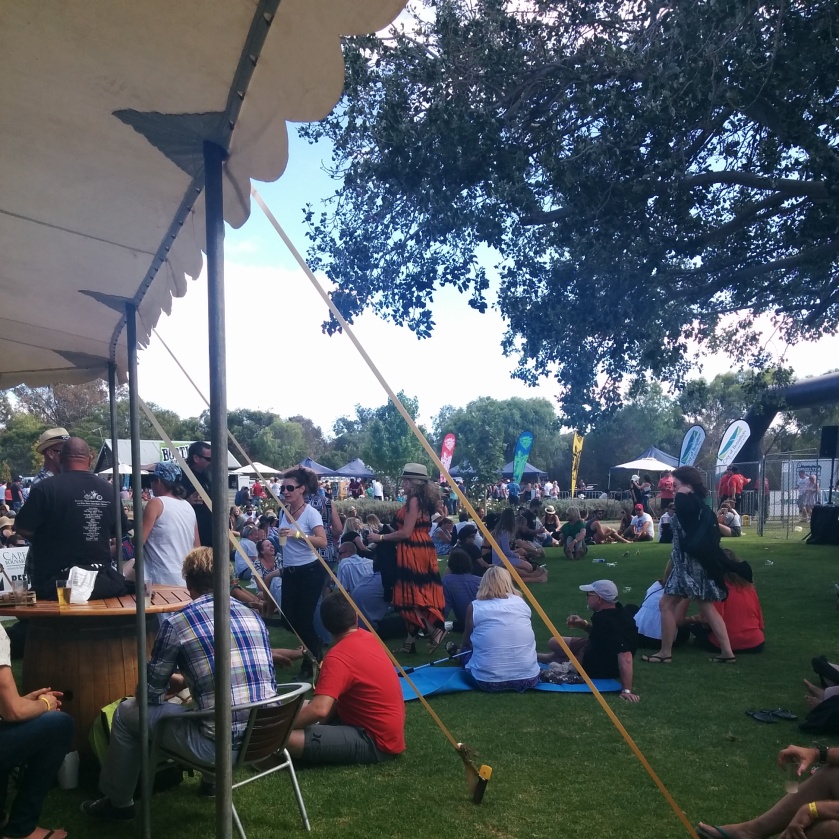 It was nice to look around the festival, people watching of course, and seeing some familiar faces from Perth, plenty of south west locals and beer-festival-regulars.

I was asked to be part of the Critic’s Choice voting panel again this year to determine the best beer of the festival. Along with Vic (The West Australian), Daniel (Nail Brewing), Jono (What’s Mashing WA blog), Steve (Boilertronics, trophy sponsor), Jason (event organiser) and Brian (West Australian Brewers Association President) I was in pretty damn good company to taste some great beers. We were taken to each brewery tent to sample one beer of their choosing, at the end we had three votes each and then results were:

Highlights and Sneak Peeks from the day:

Colonial’s IPA on Tour series continues with the last of their Chief Pontiac, an American style IPA, floating around and the release of their New Zealand IPA – Lil NIPA hot on its heels. This was the first beer I tried for the day and it was beautiful. The aroma wasn’t as big as I had expected but the flavours were great, bold and well rounded.

Colonial Brewing’s line up of beers for the day

Over a plastic cup of the Eagle Bay Summer Ale, the current Brewer’s Series release of which there’s only about 800L still around, I chatted with retail and marketing manager Margi and found out that, as always, there’s a lot happening at the brewery.

Three brewers are now working hard to bring Eagle Bay beers to thirsty hands with the addition of Shannon (ex-Duckstein) to the brewing team towards the end of last year.

The ESB has been recently released in bottles and soon Eagle Bay’s Vienna Lager will get the same treatment which will mean their full core range will be available in bottles. Margi hopes to see Vienna bottles on shelves by March.

The next Brewer’s Series, their limited release, is almost ready and Eagle Bay fans will rejoice knowing it will be their much loved Black IPA. Keep your eyes on the Eagle Bay Facebook or Twitter page for details on the launch.

Since I was driving I was restricted in the number of beers I could sample but I did get to try Margaret River Ale Co’s Pale Ale. It’s their best selling beer at the tavern and given its sessionability it’s easy to see why.

Getting briefly distracted from the topic of beer, it was hard not to notice the impressive Yoder smokers they had wheeled down for the day. Fully imported from Kansas to satisfy a desire for real American BBQ, owner and operator of Margaret River Ale Co & Settlers Tavern Rob was proud to handed out finely sliced brisket to all the judges and it was hard not to dive in for more.

The latest Southern Wailer, Cheeky Monkey’s limited release series, was a sell out at the festival. The ESB – Extra Special Belgian – is an extra special bitter using the same Belgian yeast as their Hagenback Belgian IPA. The result is a delicious twist on a traditional English bitter which clearly many agreed on because the keg was empty by 4pm.

The newest brewery to the south west, Young Henry’s is making an impact. The smiling faces at their tent were contagious was locals discovered YH beers for the first time whilst proud ‘sparkies’ who have been working on the ‘beer farm’ enjoyed the beer they’ve had a little part in helping get from brewery to hands. I got to chatting with Chloe, brewer and all round great gal, about how it has all been going and she was overwhelmingly positive.

Replicating the Real Ale was her first big challenge, aside from getting the brewery up and running of course, to bring the same brew loved in Sydney to the south west. She is keen to show off the beer farm and is hosting the WA International Women’s Brew Day at her brewery on Sunday 8 March for any women in the beer industry who would like to get involved.

Anyone who has been to Bush Shack knows the name is more than a name, it’s an accurate description of the brewing facilities owner and brewer Danial Wind works with. Different to his neighbouring breweries Danial brews what some may label as “novelty” but their Milk Stout should be in the list for any self respecting beer geek to actively seek out. I remembered this beer from last year and it tasted gorgeous then too, even though the sun was out this lush, chocolatey beer went down a treat. So much so that the myself and the other judges all voted it in our top three beers for the day, the result being Bush Shack’s Milk Stout took home the trophy for Critic’s Choice beer for the festival.

It also has to be said that despite the busy day the Bush Shack staff were washing and rinsing everyone’s glass, that’s pretty damn good I reckon.

Another great festival and it seems to keep getting better each year (except more toilet paper in the girls toilets please!) and makes me pretty happy to see so many great breweries serving up fresh local beers. Big thanks to event organisers Buzz Marketing for inviting me along and asking me to participate in the judging panel. See you next year!