A new venue at Busselton’s Old Broadwater Farm, tucked in behind Fairway Drive, gave the festival a bit of a make over for its third year (if my beer soaked brain recalls the years correctly)

Let’s just get it out the way early shall we? 2013 was not a good year for the South West Craft Beer Festival. From the moment those ticketing machines failed and the queue of people got progressively longer festival organisers were facing an uphill battle. I felt for them; sometimes shit goes up and there’s a fan waiting to spread it all over the place.

2014 was much brighter. Luminescent in fact.

A new venue at Busselton’s Old Broadwater Farm, tucked in behind Fairway Drive, gave the festival a bit of a make over for its third year (if my beer soaked brain recalls the years correctly). More space, more trees to relax under and a much improved layout with food and beer stalls scattered amongst each other rather than being separated like troublesome kids. I had a brief chat with organisers on the day, very happy with Saturday’s turn out, and they say next year there will be even more shade for relief from February heat. Of course having said that it rained the first year of the festival so who knows.

I walked in just after 1pm on Saturday, traditionally the busier day of the weekend long festival, and wasn’t greeted by queues, only friendly security and festival staff. Happy days!

Immediately I set about my mission, to taste the eight beers submitted for judging for the Critic’s Choice Award since the organisers were nice enough to ask me to be one of aforementioned critics. I was in fine company too – joined by fellow beer writer and award winning home brewer Jeremy Sambrooks, WA Brewers Association President Brian Fitzgerald and the Busselton-Dunsborough Mail rounding out the judging panel.

Here are the beers that were up for judging … 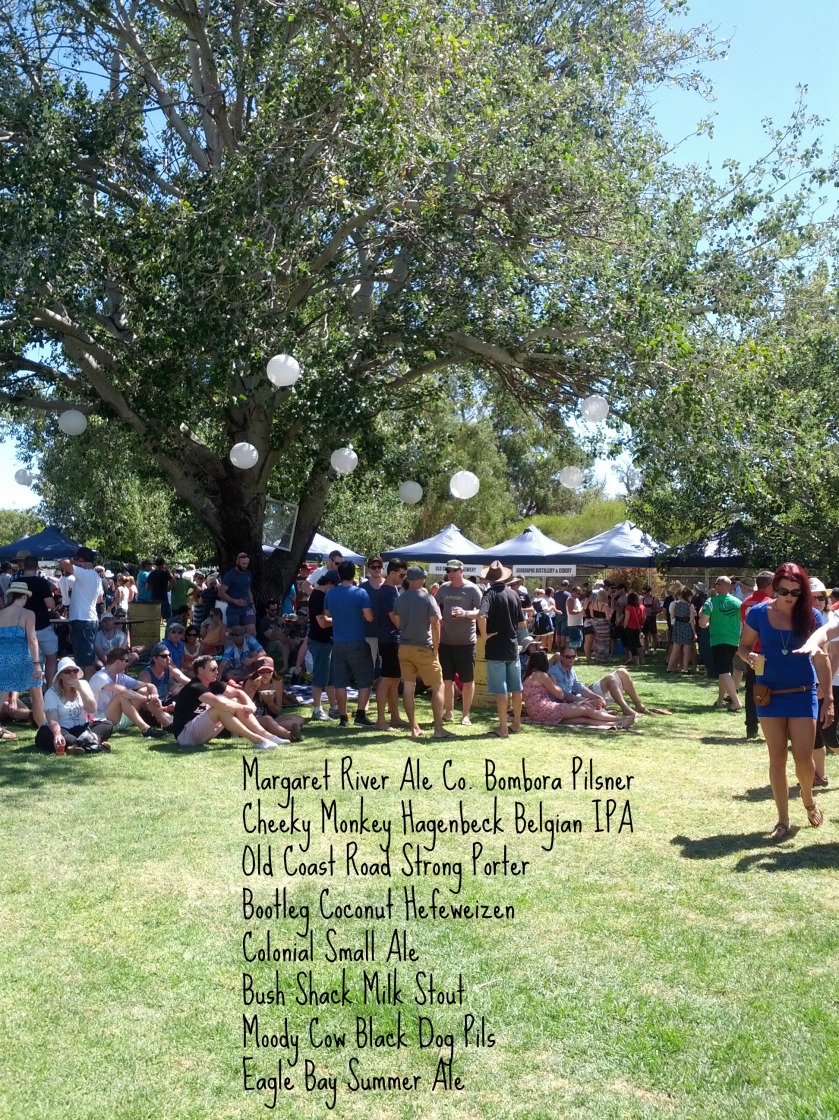 The Cheeky Monkey Hagenbeck Belgian IPA has always been a favourite of mine. When Jared “Red” Proudfoot was head brewer my tasting notes on my first pint was all praises for it’s strong bitterness, orange and piney hops. Now it’s Alex Poulsen at the brewing wheel, so to speak, and the Hagenbeck is still amazingly tasty. It’s fresher and crisper than ever with a little spice and great stone fruit flavours to whisk you into a happy IPA place.

Buck Shack’s Milk Stout was full of milky, chocolately, vanilla goodness but perhaps suffered from the almost overwhelming heat of the day. In fact this silly judge wore jeans so I was extra uncomfortable. It was a beer rated highly by all judges on the day.

On the other end of the weather-to-beer chart was Eagle Bay’s Summer Ale, another highly rated beer with all judges. Summer in a glass … that’s all I will say. Summer in a freaking glass.

“Freaking awesome” I wrote on my piece of paper on the day. Bootleg brewers Michael Brookes and Ryan Nilsson-Linne have created a little tropical monster with this one. The beer is so good that it almost makes me forget about the girl with the coconut boobs on the logo, sorry boys not my cuppa tea. The Coconut Hefeweizen still tastes very much like a hefeweizen should with banana and slight vanilla flavours. The toasted coconut folds in nicely, slipping into the style as if it’s meant to be there the whole time, it’s like an uninvited guest who turns out to be the life of the party. I could barely keep my nose out of the glass long enough to drink it.

And it turns out the drinkers agreed with us with Coconut Hefeweizen, taking out the People’s Choice award for best beer of the festival too! Nice work Bootleg!

One thought on “girl + SWCBF”