My first thought when I poured the beer into a glass was “fat bubbles!” It’s full of fresh and crisp fruity hops with a dry bitter finish that practically dares you to take another sip. It’s also a mere 3.8% abv. Yippee! A tasty lower alcohol beer! 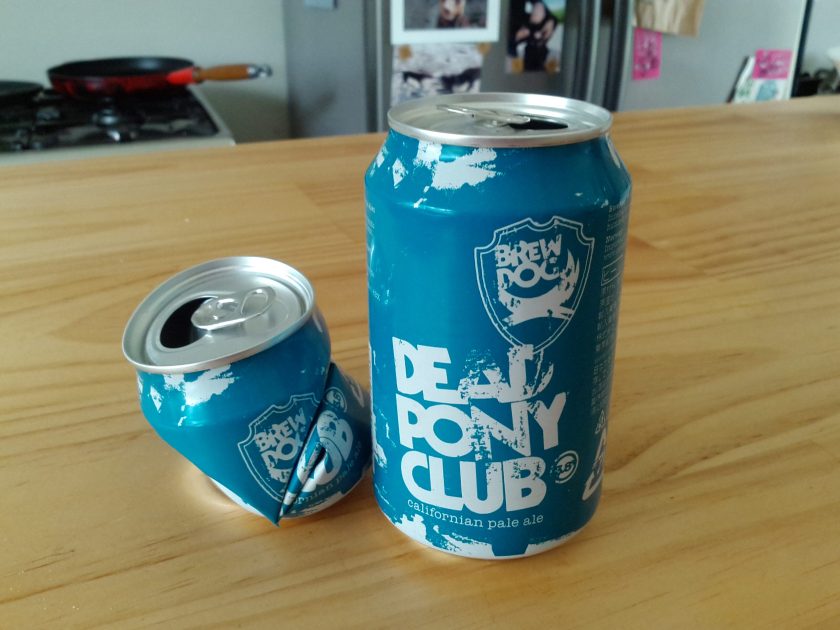 For those unfamiliar with the beer called Dead Pony Club from Scottish brewers Brewdog, the title of this post may seem a touch weird / creepy / a cry for help. For everyone else it’s just another blog post about a nice tasting beer.

So, Dead Pony Club – why the name? I honestly couldn’t say. I love a quirky website and punchy beer blurb but this made zero sense to me. Perhaps it’s because I don’t know anything about howitzers, internal combustion or mufflers. Heck, I don’t know anything about ponies either. My dad has two miniature horses which are definitely not ponies and that’s as far as my pony knowledge goes but I’m getting somewhat sidetracked. Why is this beer called Dead Pony Club? I don’t know. Does it taste good? Yes it does.

My first thought when I poured the beer into a glass was “fat bubbles!” It’s full of fresh and crisp fruity hops with a dry bitter finish that practically dares you to take another sip. This beer is all about the hops but not in an overbearing way. There’s piney, grapefruit and citrus notes and I got a little grassiness and biscuit flavours to boot.

For whatever reason the beers with big booze numbers get a fair bit of attention. Big booze is sometimes mistakenly equated with brilliance. The same can be said for high IBU and massively hopped beers. In reality, and I’m probably stating the obvious, it’s about balance over and above claiming the “biggest” something.

Dead Pony Club is well balanced and tasty with great fresh hop characters and is less than 5% abv, adding to it’s appeal. I can have a few of these and not worry about the booze factor too much or more accurately about the headache the next day. I’ve noticed that since turning thirty I don’t bounce back from boozy nights as brightly as I used to.

The problem is that great tasting, full flavoured lower alcohol beers are hard to come by. Recently my partner tried a booze free beer and when I asked how it tasted he replied “like sadness”.

Here are a few of my favourite low booze beers that don’t taste like sadness, regret or any other depressing flavours …

This is my go-to lower alcohol beer. Fun fact about this beer – the name is Rogers’ not Roger’s, as in it doesn’t belong to one guy named Roger but it belongs to two guys named Roger – namely Roger Bussell and Roger Bailey who designed the beer. I guess “fun fact” might depend on your definition of fun. Anyway, this malty, hoppy amber ale has long been a favourite of mine and has become pretty widely available.

It pours a gorgeous deep amber colour, you gotta love a sexy appearance, and is a great balance of sweet malt and fresh hops. I get hints of marmalade and oranges too. Available at the brewery, in bottles and mini kegs.

Tropical fruits, a little citrus and good bitterness. Available at the brewery and in bottles.