It started at Mountain Goat, invaded The Royston, then Stone and Wood before ending at Cookie

The afternoon consisted of five courses of amazing food and each matched with a beer from Mountain Goat and Brooklyn Brewery. The afternoon also contained a lot of memorable quotes that are perhaps not fit for printing and since I dropped an entire wedge of cloth aged cheddar on the floor, I had best keep my mouth shut. I blame the knife. 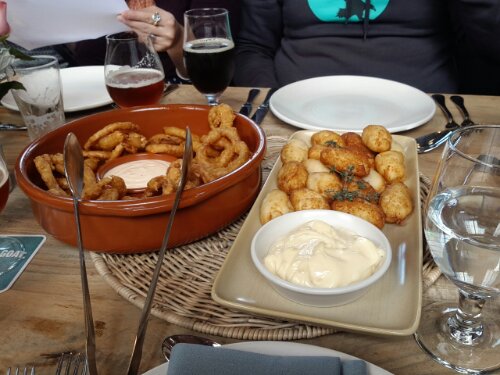 Entrees were a selection of dishes to pick and choose from. Bloody Mary onion rings in Brroklyn dark ale batter, salt cod brandade croquettes and mini open Reuben sandwiches but the highlight was definitely the sticky New York ribs. It was a delicious match with the Brooklyn Silver Anniversary Lager.

As you can see, the ribs were very tasty, sorry if you actually wanted to see them served! They were rich and sticky but not over the top, or end of the table picked out spices like cinnamon, nutmeg and allspice.

Tom from Brooklyn Brewery chatted about their Silver Anniversary Lager, basically a special version of their flagship lager, they dry hop this one with Cascade hops and it is bottle conditioned. It was stunning, it poured this gorgeous vibrant copper colour so I found it hard not to keep holding it up to the light. This action left me very vulnerable to looking like a total beer nerd but hey, it’s going to happen to all of us at Good Beer Week.

The lager had huge flavours that held up perfectly to the smack down of sticky ribs; citrus, tropical fruit and a shot of candied sugar sweetness. Delicious.

A small group of us then went to have a quick look at the brewery where there was a brew already on the go and it needed a little attention, namely hop attention. When asked if someone wanted to throw 3kg of hop pellets into the tank my arm instinctively shot up. Yup, I’ll now be adding Mountain Goat to my list of beers which I will lay claim to having helped brewed. Soon I will be intolerable I’m sure.

Mains were served and it was more than a little indulgent … Not five or ten but 18 hour braised lambs neck with caramelised sweet potato mash. Pardon my awful photography but frankly it is a miracle I remembered to take a photo before devouring this dish in a very unladylike manner. 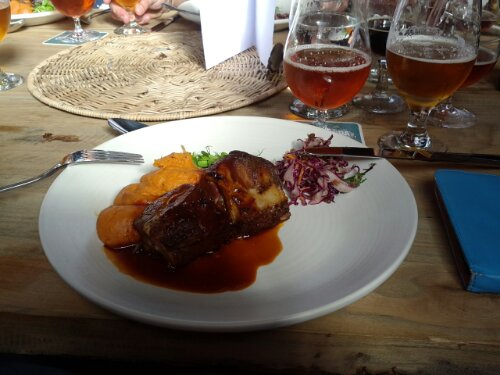 They served the Brooklyn East India Pale and the Mountain Goat Rye India Pale Ale with mains and it was the rye IPA that not only stood out, it jumped in the air, did a back slip and then took a bow. It was amazing.

I couldn’t help but compulsively stick my nose in the glass, the aromas of ruby red grapefruit from the Goat Rye IPA were addictive. Hoppy, spicy and a little honey, the beer was uber-fresh, less than two days old, and was an instant favourite at our end of the table.

Then dessert arrived. According to the menu there were five different cheeses heading our way after dessert so many of us had agreed that cheese was way better than dessert so we would probably just taste dessert rather than overindulge. Oh how wrong we were.

Chilli and dark chocolate fondant with freeze dried mandarin, oh yeah! Served with Brooklyn Local 1 and Mountain Goat Fx Stout, from looking at the beers it seemed obvious that the stout would win over the hazy straw colour Local 1. Wrong again.

Brooklyn Local 1 is a strong Belgian ale made with their house Belgian yeast. Its spicy coriander and almost witbier like characters were a surprisingly good match to dessert. I think it was a little contrast and a little compliment, especially the Belgian yeast qualities with the chilli and freeze dried mandarin.

Ok, now time for cheese and admittedly my notes have been getting a little less detailed. We were spoilt with Milawa Ceridwen Goat’s cheese, Berries Creek Blue cheese, Ashgrove matured cloth cheddar (the one I accidentally dropped on the floor), Wicked white mould brie and Red Square washed rind.

The stand out match was easily the washed rind with Brooklyn’s Sorachi Ace. Our end of the table were already Sorachi Ace fans and we happily tucked into our bottle before stealing a half bottle from an adjoining table who were heading for the door. The washed rind was a fantastic example of great creaminess and strong mushroom rind that just begs to be eaten. The Sorachi Ace just bubbled over it and it was heavenly!

From there we invaded, and trust me that is the correct word for it, The Royston – home to the WA Pint of Origin so it was a showcase of Feral, Bootleg, Matso’s and more. I went for a Feral Fanta Pants that, whilst delicious, was perhaps a little over ambitious considering the mass of beer we had just come from.

Soon it was time for a nap and whilst you might be giggling at me, it was a damn good nap! Unlike some I managed to keep it to a quick nap and not a three hour sleep and in no way am I referring to a certain tall brewer from Fremantle. I’m confident that my cheekiness will come back to bite me in the coming days …

Next we were off to The Gathering where Stone and Wood were pouring their first kegs of this years Stone Beer, an annual limited release. Set at Blender Studios filled with various art projects, located down an alley that was marked by the presence of a big taco truck it seems fitting to describe it as ‘oh so Melbourne’. It is a phrase that as a Perth-ite feels compulsory for me to say at least once during my Melbourne adventures. 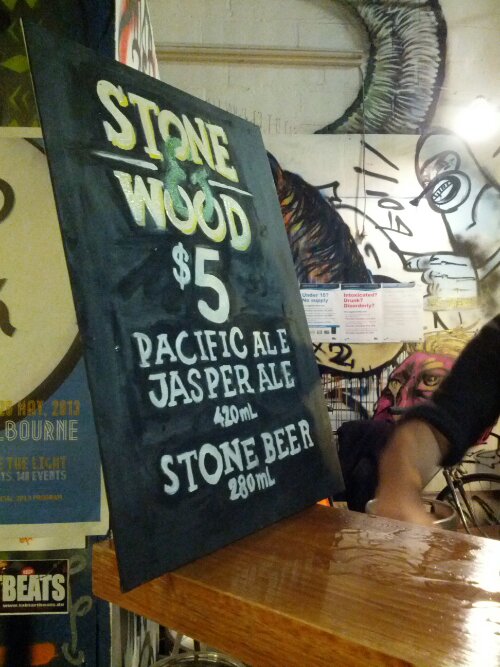 The Stone Beer was lovely and light bodied with a great roastiness and toffee notes going on. I briefly got to meet the brewer, Brad Rogers, and hopefully I managed to avoid sounding like a crazy beer fan as I told him how much I enjoyed their beers.

By this stage it was definitely time for some dinner so a handful of us walked to Cookie, Melbourne’s beer hall meets Thai food and we sat down to a feast of spiced chicken, soft shell crab, drunken noodles (name of the dish and in no way reflective of how we were), pan fried squid and pork ribs. The beer list was a short novel but I didn’t have a look in fear of analysis paralysis, instead I opted for a nice little Berlinerweiss from Bridge Road Brewers that I had spied on tap earlier. At 3% abv with a little funk and a little green stone fruit flavours, it was a great way to softly finish a very big day.