Five Bar and The Brisbane Hotel – both in Mt Lawley and both former employers of mine and both amazing venues. Get acquainted or simply visit again and again like an old friend. Just be sure to get a beer whilst you’re there … 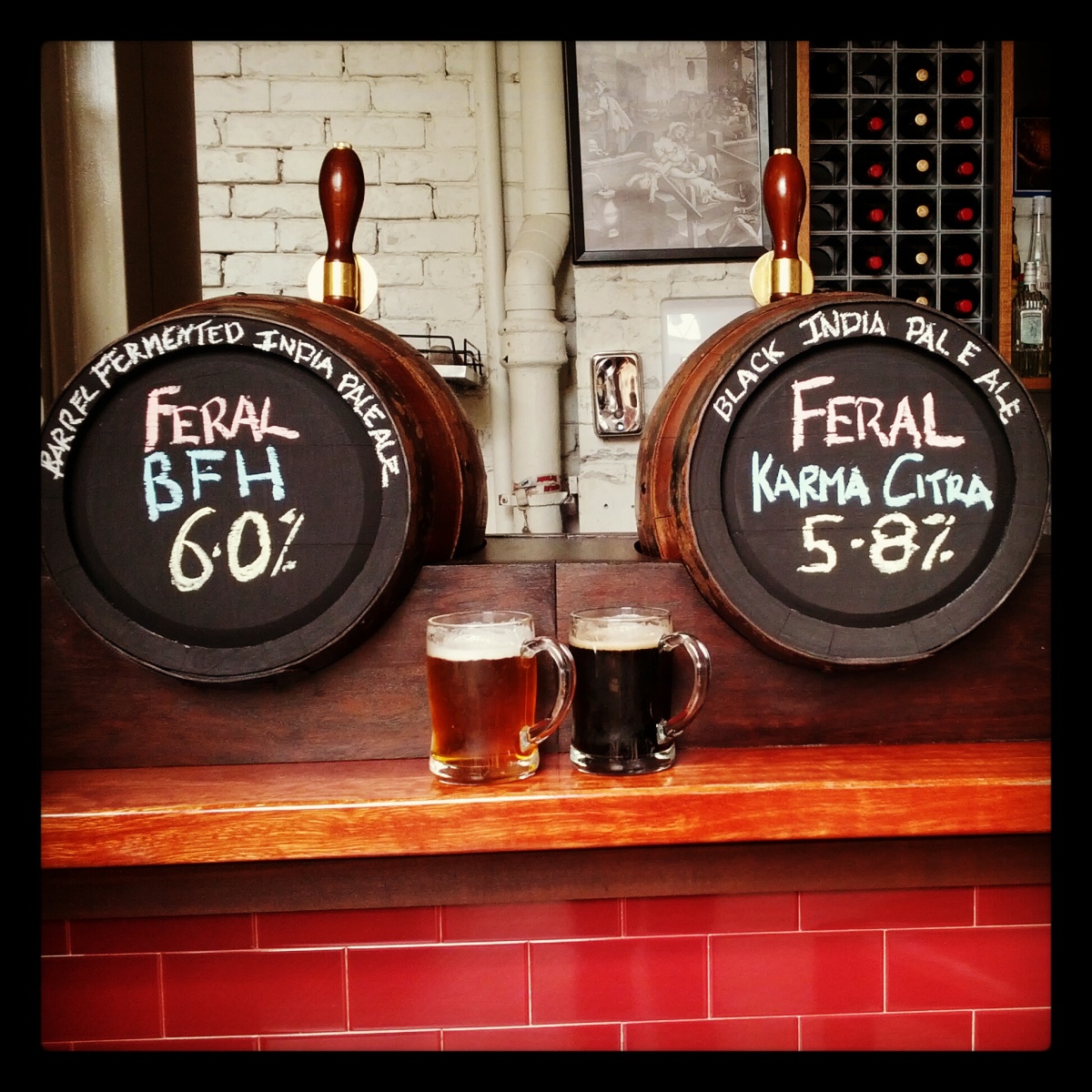 Driving up to Perth inevitably results in visiting places with friends behind the bar, so it was not a surprise that my boyfriend and I found ourselves hanging out at Five Bar & The Brisbane Hotel on a sunny Saturday afternoon.

Located along Beaufort Street in the always evolving suburb of Mt Lawley, it is the sort of strip you can spend a whole day exploring. Book shops, almost endless cafes, clothing, knickknacks stores, day spa, florists, furniture stores, and don’t forget the pubs, the bars and the places to eat. What’s best is that you could spent a fortune in a day or you could spend very little. I have had many happy days doing a delightfully cheap n’ cheerful feed at Taka’s before grabbing a pint at The Flying Scotsman then walking around Hyde Park on a nice sunny day.

We arrived at Five Bar just before lunch and as my most recent ex in terms of employers, where I was Assistant Manager, it’s always nice to drop back for a visit! We sat at the bar and watched as it slowly filled with hungry Saturday lunch people. We had gone straight for the Feral taps, sighting Barrel Fermented (Hop) Hog and Karma Citra (India Black Ale) on offer. It made sense for us to get one of each and share since we are both wildly in love with Feral Brewing.

Five Bar is a bit unique in that although they are a James Squire Ambassador Venue, offering 5 James Squire Beers and their Orchard Crush Cider on tap, they are also able to offer 2 Feral beers from a second set of taps. This second set of taps is also set a little differently, both in appearance and function. They stand out as two old wooden barrels on the bar, it’s hard not to wander down and take a look (though the barrels don’t actually store any beer) and secondly, the temperature is set a fraction higher and the carbonation a fraction lower. This has been done with consultation from Brendan, Owner and Head Brewer at Feral, meaning his beers are served with a little less chill to enhance flavours and with a little less bubble which, I find, results in a smoother, fuller mouth feel. Five Bar tend to get a couple of kegs of this and that from Brendan so it always pays to look down the end of the bar and see what’s there. More often than not it’s something offered normally only at Feral Brewing and always something sensational.

The B.F.H (Barrel Fermented Hog) remains the American IPA style of Hop Hog but, as though been sent to a naughty corner, has spent time in new French oak. The result is some delightful vanilla flavours lingering on the front of your palate. Dominant American hops are still very much present and very much welcome!

The Karma Citra, always a favourite of mine, is an India Black Ale, or Black IPA, or whatever you want to call the style. On it’s first appearance at the bar, I explained the style to people as a porter and an IPA who had a baby. It seemed to get the idea across in the most time efficient manner. Dark malts for chocolate overtones, and we’re talking proper dark chocolate here, the 70% and above cocoa stuff. It’s a wonder they even manage to get to your nostrils with all the big hop aromas going on but they manage nicely. Citra refers to the hop variety used, which was created in a cross breeding hop program in 1990 and so named for a heavy citrus characteristics it brings to the table. Tropical fruits tag along for the ride too. It’s jet black in appearance with a smooth tan head and then those fruity flavours jump out at you with hop bitterness and malts. Love.

We left, intrigued by the Mash Up, a New Zealand collaborative brew reportedly by 44 NZ craft breweries but had a lunch appointment at The Brisbane.

One of my favourite city beer gardens that has been meticulously cared for since The Brisbane re-opened her doors in 2005. Perhaps it’s a bit on the cliche side but when you’re sitting there and the sun is shining through healthy green trees, it’s just a wonderful place to be! The Brisbane is another one of my former employers, a place I spent many happy years with, and it always makes me smile to come back and visit.

We sat in the back corner of the beer garden and I had decided to re-visit a beer I hadn’t had in quite some time, Redback Original Wheat (no lemon), and HELLO BANANA! I don’t remember tasting that much banana on it in the past. I was quite pleased and it had to be said, the beer looked sensational too. That distinctive shape, the red streak, the clarity and the sun, well, we were soon ordering another. Also, if you go to The Brisbane and don’t get the Homemade Sausage Rolls, you’ve done yourself a grave disservice and you should slap yourself on the wrist, write it down in your phone and make sure you order it next time.

All in all a rather successful afternoon in Mt Lawley and that only covered two spots!

You can visit Five Bar any day from 11am for tasty Feral beers on tap and be sure to ask the bar staff if there’s anything new in the fridges.

You can drop by The Brisbane any day too if you fancy indulging in Homemade Sausage Rolls with a pint in the beer garden.